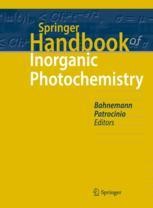 The handbook comprehensively covers the field of inorganic photochemistry from the fundamentals to the main applications.

The first section of the book describes the historical development of inorganic photochemistry, along with the fundamentals related to this multidisciplinary scientific field. The main experimental techniques employed in state-of-art studies are described in detail in the second section followed by a third section including theoretical investigations in the field. In the next three sections, the photophysical and photochemical properties of coordination compounds, supramolecular systems and inorganic semiconductors are summarized by experts on these materials. Finally, the application of photoactive inorganic compounds in key sectors of our society is highlighted. The sections cover applications in bioimaging and sensing, drug delivery and cancer therapy, solar energy conversion to electricity and fuels, organic synthesis, environmental remediation and optoelectronics among others.

The chapters provide a concise overview of the main achievements in the recent years and highlight the challenges for future research. This handbook offers a unique compilation for practitioners of inorganic photochemistry in both industry and academia.

​Prof. Dr. rer. nat. habil. Detlef W. Bahnemann received his PhD in Chemistry from the Technical University Berlin (Germany). Today he is Head of the Research Unit „Photocatalysis and Nanotechnology“ at Leibniz University Hannover (Germany) and Director of the Research Institute "Nanocomposite Materials for Photonic Applications" at Saint Petersburg State University (Russian Federation). His research topics include photocatalysis, photoelectrochemistry, solar chemistry and photochemistry focussed on synthesis and physical-chemical properties of semiconductor and metal nanoparticles. His more than 500 publications have been cited over 59,000 times (h-index: 96). He is Visiting Research Professor at Queens University Belfast, DeTao Master of Photocatalysis, Nanomaterials and Energy Applications, and holds a Guest Professorship at Tianjin University (China) as well as several visiting professorships in China, Malaysia, Saudi Arabia, and Britain.

Prof. Antonio Otávio T. Patrocinio received his B.S. degree in Chemistry from the Universidade Federal de Ouro Preto, Brazil (2001) and his Ph.D. in Inorganic Chemistry from Universidade de São Paulo, Brazil (2009) with a sandwich period at University of North Carolina at Chapel Hill (2008). He spent one year as a postdoctoral fellow at Universidade de Sao Paulo (2010) and in 2011 he moved to the Institute of Chemistry of Universidade Federal de Uberlandia, Brazil, as Assistant Professor. In 2012, he was honoured by the German Federal Ministry of Education and Research (BMBF) with the Green Talents Award for his research contributions in sustainable growth and renewable energy. Between 2016 and 2018 he visited the Institute of Technical Chemistry of Leibniz University Hannover as a Alexander von Humboldt research fellow. He is currently Associate Professor at Universidade Federal de Uberlandia, where his research focuses on nanostructured metal oxide-based thin films and photochemical properties of coordination compounds for solar energy conversion.