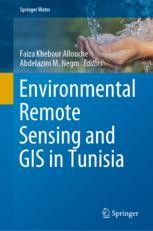 This book focuses on monitoring and assessing various environmental processes in Tunisia using state-of-the-art remote sensing and GIS technologies. In addition to addressing the diversity of Tunisian landscapes and providing spatial analysis of natural, cultivated and urbanized environments. It presents and discusses several case studies on integrated RS / GIS approaches for mapping, modeling, monitoring and evaluation. Moreover, in this volume authored by experts in the topic from Tunisia and other countries, authors assess the agro-environmental applications from Tunisia and offer different methods and applications to environmental processes and risks including drought, degradation, flood, planning, Yield estimation, dust storm detection, dry land vulnerability, wetland dynamics and others. The material presented here will help decision-makers plan sustainable landscape and agricultural management policies that preserve biodiversity and contribute to achieving sustainability goals and for researchers, it will expose methodological approaches used in different fields of research. Graduate students and Practionioner engineers working in the field of RS/GIS will also benefit from the book. The book ends with a set of conclusions and recommendations to support researchers  underscoring the need for further research in this area.

Dr. Faiza Khebour Allouche is an associate professor of Landscape and Environment at the High Institute of Agronomic Sciences Chott Meriam (ISA-CM), Sousse University, Department of Horticultural Sciences and Landscape, Laboratory of Integrated management of natural resources: remote sensing, spatial analysis and modeling (GREEN-TEAM). She received the BsC. degree in Agronomic sciences from the ISA-CM, Sousse, in 1997, the M.S. degree in Improved crop production in 2000, With Honours, from the National Agronomic Institute of Tunis (INAT), Carthage University. She got her PhD degree in the field of Geography and management in 2007, with the highest level of distinction, from the Mirail Toulouse2 University, France, and has an Advanced Certificate in Geomatics and Applications from the National School of Geographic Sciences-Marne-La-Valée,Paris, France and the Hassania school of public works, Casablanca, Marocco.

Faiza Khebour Allouche  participated in several national and international projects from 1998 until now. She published more than 50 papers in national and international journals and conferences. She is a member of the scientific committee of several international conferences and a member of the organizing committee of others and participated in more than 30 conferences. Her principle background is related to engineering sciences and integrated remote sensing - GIS applications in the field of environment. The practical experience focus on landscape analysis, land degradation, land use, soil mapping, risks, modeling, and other different environmental studies. Her current research activities focuses on the integration of Geospatial data in different fields of research in support of the Sustainable Development Goals.

Prof. Abdelazim Negm is a professor of Hydraulics (and Water Resources) at the Faculty of Engineering, Zagazig University, Egypt, since 2004. He got his Ph.D. in 1992 from Zagazig University (ZU), and his M.Sc. from Ain shams University in the year 1990. He was the vice dean of the Faculty of Engineering of ZU from 12/2008 to 12/2011 and was the head of the Environmental Engineering Dept. at Egypt-Japan University of Science and Technology (E-JUST), Egypt, from October 2013 to March 2016. He participated in several international projects from 2006 until now. He published more than 400 papers in national and international journals and conferences and contributed in more than 50 chapters. Some of his papers were awarded prizes of the best papers. He is the editor of 12  volumes at the Springer Handbook of Environmental Chemistry Series (HEC Series) during the period from 2017-2019 and 12 volumes in other series’. He is a member of the scientific committee of several international conferences and a member of the organizing committee of others and participated in more than 90 conferences as well. He delivered several keynote talks at international conferences. Prof. Negm is a reviewer of more than 40 international scientific journals indexed in Scopus and WoS. He was the editor-in-Chief of EIJEST during the period of 2017-2020,  an  editor of the EMJEI,  which is published by Springer, and editor of Scientific African Journal which is published by Elsevier. Also, he is a member of the editorial board of several scientific journals. Moreover, he is a member of the editorial board of the famous Springer Series titled “Handbook of Environmental Chemistry since 2019 and  the head of the permanent scientific committee on Water Resources (committee no.115), the supreme council of Egyptian Universities, Egypt. Prof. Negm is listed in the most famous and prestigious directories in the world including  the American Biographical Institute (ABI), Inc, USA, "Marquis Who's Who in the World",  27th Ed., 2010, USA  until now and in IBC's 2000 Outstanding Intellectuals of the 21st Century by International Biographical Center, Cambridge, England, from 2011 until the present. He was nominated for various awards by both ABI and IBC during the period of 2011-2012.