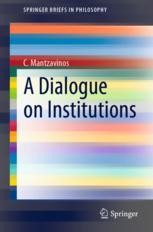 A Dialogue on Institutions

This book consists of a dialogue between two interlocutors, Pablo and a student, who discuss a great range of issues in social philosophy and political theory, and in particular, the emergence, working properties and economic effects of institutions. It uses the dialogical form to make philosophy more accessible, but also to show how ideas develop through intellectual interaction. The fact that one of the interlocutors is the "student" in a place in the real world makes the dialogue quasi-fictive in character and enables the active engagement of the reader. After all, we are all philosophers and we develop our own philosophy by exchanging views and arguments. The dialogue form is and should remain the principal form of philosophizing, since ideas, like butterflies, do not merely exist – they develop. This is certainly the case in actual philosophical interaction, and it can be the case in written philosophical exposition. Although the dialogue does not presuppose prior acquaintance with the respective philosophical and social scientific literature under discussion in this book, it makes arguments more accessible, and conveys the feeling that there are no definite solutions to philosophical problems.

Before his current appointment in Athens, he held the Chair of Economics and Philosophy at Witten/Herdecke University, Germany (2004-2011). He has also taught at Freiburg, Bayreuth, and was a Visiting Assistant Professor at Stanford (2000-2001). He was a Senior Research Fellow at the Max Planck Institute for Research on Collective Goods, Bonn (2001-2004) and served as a Visiting Scholar at Harvard (twice), at Maison des Sciences de l’Homme, Paris (twice) and at the University Center for Human Values at Princeton. He holds two PhD’s, in Economics and in Philosophy, both from the University of Tübingen.