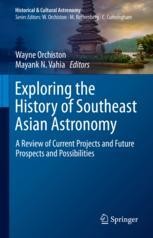 A Review of Current Projects and Future Prospects and Possibilities

This edited volume contains 24 different research papers by members of the History and Heritage Working Group of the Southeast Asian Astronomy Network.  The chapters were prepared by astronomers from Australia, France, Germany, India, Indonesia, Japan, Malaysia, the Philippines, Scotland, Sweden, Thailand and Vietnam. They represent the latest understanding of cultural and scientific interchange in the region over time, from ethnoastronomy to archaeoastronomy and more.

Gathering together researchers from various locales, this volume enabled new connections to be made in service of building a more holistic vision of astronomical history in Southeast Asia, which boasts a proud and deep tradition.

Professor Wayne Orchiston has BA (First Class Honours) and PhD degrees from the University of Sydney. Formerly he worked in optical and radio astronomy in Australia and New Zealand. He now works at the National Astronomical Research Institute of Thailand and is also an Adjunct Professor of Astronomy in the Centre for Astrophysics at the University of Southern Queensland.

Wayne has wide-ranging research interests, and has prepared papers on aspects of Australian, Chinese, English, French, German, Georgian, Indian, Indonesian, Iraqi, Italian, Japanese, Korean, Malaysian, New Zealand, Philippines, South African, Thai and US astronomy. He is the current President of Commission C3 (History of Astronomy) of the IAC. In the past, he was responsible for founding the Transits of Venus and Historical Radio Astronomy Working Groups. In 1998 Wayne co-founded the Journal of Astronomical History and Heritage, and is the current Editor. He also serves as an Editor of Springer’s Series on Historical and Cultural Astronomy. In 2013 the IAU named minor planet 48471 ‘Orchiston’ after him, and more recently he and one of his former American graduate students, Dr Stella Cottam, shared the 2019 Donald E. Osterbrock Book Prize from the American Astronomical Society for their book Eclipses, Transits, and Comets of the Nineteenth Century: How America’s Perception of the Skies Changed.

Professor Mayank Vahia completed his PhD in Astrophysics in 1984 from the Tata Institute of Fundamental Research (TIFR). After completing his PhD he continued to work at TIFR until his retirement in 2018 where he rose to the position of Professor. During his research career in TIFR he worked on making and operating space telescopes that were flown on American, Russian and Indian satellites.

Mayank has published more than 250 research papers during his career, more than 50 of which are about history of science and astronomy. He has edited three books and written two books. He initiated the Astronomy as well as Junior Science Olympiad programmes in India and guided them for more than a decade. He was also the Director of Nehru Planetarium in Mumbai for a year. He has served on the Governing Council of Deccan College, Pune and Anantacharya Indological Institute, Mumbai and has been on the Board of Studies of Yashwantrao Chauhan Maharashtra Open University. Mayank is a member of Commissions C3 (History of Astronomy) and C4 (World Heritage and Astronomy) of the IAU, and is on the Editorial Board of the Journal of Astronomical History and Heritage. After his retirement he started an innovative School of Mathematical Sciences at the Narsee Monjee Institute of Management Studies, a Deemed university in Mumbai.
Show all