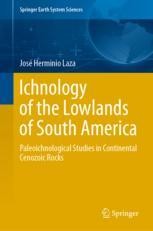 Ichnology of the Lowlands of South America

Ichnology is the science of marks, tracks, trails, traces structures and other sources of evidence of biological activity, beyond the living beings themselves, when studied both in continents and oceans. In spite of its scientific value and interdisciplinary contribution, particularly in South America, in the complex task of identifying ancient environments, information is dispersed and sometimes even ignored. This book has recovered the remarkably abundant information that Ichnology of terrestrial environments has incorporated. The studied geographical regions are the Pampas of Argentina, vast lowlands with a wide latitudinal distribution in between the warm and wet subtropical areas and the cold deserts of Patagonia. Pedogenetic processes preserve tracks and marks found in sediments, rock surfaces and soils, revealing the activity of life forms. This book refers to a variety of signs of biological activity, particularly in ancient soils. This volume includes abundant original information and a meticulous revision of paleo-ichnological investigations, most by the author himself, one of the most important South American specialists, during many decades of his dedication to scientific research. The book includes a review of the stratigraphic sequences of the Cenozoic chronostratigraphic scheme. Firstly, the author provides a scrutiny of the continental ichnofacies and the ichnological record of the South American Cenozoic age. This is followed by chapters dedicated to the faunal associations of vertebrates, with very valuable information about the past climatic events and biogeographical changes, of undoubted value for those scholars interested in vertebrate Paleontology. Likewise, the highly relevant ichnotaxonomy is also developed exhaustively, with special reference to the essential activity of insects in the paleosols, mostly ants and termites.
Finally, this book presents the most complete, extensive and up-dated bibliography in the subject, which is probably unique as such for southern South America and most of the world.
Certainly, this is a book that will provide valuable scientific tools for those specialists interested in this infrequent discipline, either paleontologists, biologists, geologists, pedologists and sedimentologists.

Former member of CONICET (National Council of Scientific Research of Argentina), forming part of the staff of the Ichnology Division, National Museum of Natural Sciences “Bernardino Rivadavia” and of the Vertebrate Paleontology Division of the La Plata Museum.