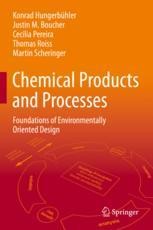 This textbook provides both students and professionals alike with a transdisciplinary and comprehensive foundation to design responsible chemical products and processes that protect human health and the environment. It serves as a compact guide that brings together knowledge and tools from across multiple disciplines. Readers are introduced to a set of core topics with focus placed on basic technical methods and tools (including life cycle assessment, product and process risk assessment, and thermal safety concepts) as well as on important normative topics (including philosophical, societal, and business perspectives in addition to current environmental and safety legislation). Developed in collaboration with industry partners, this textbook also provides a workable, illustrative case study that guides readers through applying the fundamentals learned to the production and application of a real-world chemical product.

Building upon the success of its first German edition published in 1998, this latest edition has been significantly updated and expanded to reflect developments over the past two decades. Its publication comes at a key time when the volume and pace of global chemical production is dramatically increasing, and the rise of social media and informed citizen scientists make the dialogue with stakeholders even more important and demanding. This textbook is a valuable resource for both the current and next generation of scientists and engineers that will be tasked with addressing the many challenges and opportunities that are appearing as a result. Covering a wide range of interconnected topics at a fundamental level applicable across scientific study programs and professions, this textbook fills a need not met by many of the other more specialized textbooks currently available.

Konrad Hungerbühler was full Professor for the Safety & Environmental Technology Group at the Institute for Chemical and Bioengineering, ETH Zurich, from 1994 to 2018. He studied chemical engineering at ETH Zurich where he received his doctorate. A position at the central chemical engineering department at Ciba in 1979 was the start of 15 years of employment in the chemical industry. While at Ciba, he set up a process development group at the production plant in Grenzach and became head of the research department in the company’s textile division. During his professorship at ETH Zurich, he authored and co-authored more than 400 peer-reviewed publications within the field as well as developed and regularly taught a course on the risk analysis of chemical processes and products. In 2017, he was awarded the Wöhler Prize for Sustainable Chemistry from the German Chemical Society.

Justin Boucher is an environmental engineer and has been a research scientist in the Safety & Environmental Technology Group at the Institute for Chemical and Bioengineering, ETH Zurich since 2015. After completing his undergraduate studies at North Carolina State University, he went on to earn an MSc in Environmental Engineering at ETH Zurich. His research then focused on understanding the emission sources and environmental fate of persistent organic pollutants as well as on strengthening international chemicals management and the science-policy interface. He has contributed to the development of various reports for UN Environment and several national environmental protection agencies. Outside of academia, he has held environmental, health, and safety roles within the biotechnology and energy sectors, as well as supported science communication projects at the Food Packaging Forum focusing on the safety of chemicals present in food packaging.

Cecilia Pereira is a chemist, who earned her PhD degree in 2013 in the Safety & Environmental Technology Group at the Institute for Chemical and Bioengineering, ETH Zurich with a research focus on the energy consumption of chemical production processes. Following her studies, she worked as a production chemist in the chemical industry for several years and is currently working as a consultant for risk assessments in a wide range of areas. Parallel to her consultancy work, she is pursuing an additional degree in sociology and philosophy at the University of Basel to gain and apply new perspectives from the social sciences to the fields of risk management and sustainable development.

Thomas Roiss is a chemist and social scientist. He completed his BSc in Chemistry at the Technical University of Vienna in 2017 and went on to work within the Safety & Environmental Technology Group at the Institute for Chemical and Bioengineering, ETH Zurich as student research assistant. There he was involved in multiple research projects involving physiologically based pharmacokinetic modelling and the development of reports in collaboration with UN Environment on improving international chemicals management. Later, he earned an MA in Science and Technology Studies from the Technical University of Munich, during which his research focused on public perception of risk regarding endocrine disrupting chemicals. He has also gained experience in the polyolefin manufacturing industry and investigated hazardous contaminants in plastic recycling.

Martin Scheringer is a full Professor of Environmental Chemistry at the Research Centre for Toxic Compounds in the Environment (RECETOX) at Masaryk University in Brno, Czech Republic and a Senior Scientist at the Institute for Biogeochemistry and Pollutant Dynamics at ETH Zurich. He was a member of the Safety & Environmental Technology Group at the Institute for Chemical and Bioengineering, ETH Zurich, from 1996 to 2018. His research in the field of environmental chemistry focuses on environmental fate modelling, material flow analysis, risk assessment, and international chemicals management. He is a founder and the current Chair of the International Panel on Chemical Pollution (IPCP), an Associate Editor for the journal Environmental Science & Technology (ES&T) published by the American Chemical Society, and the Chair of the Board of the Food Packaging Forum.