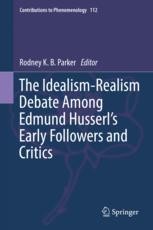 This volume aims to contextualize the development and reception of Husserl’s transcendental-phenomenological idealism by placing him in dialogue with his most important interlocutors – his mentors, peers, and students. Husserl’s “turn” to idealism and the ensuing reaction to Ideas I resulted in a schism between the early members of the phenomenological movement. The division between the realist and the transcendental phenomenologists is often portrayed as a sharp one, with the realists naively and dogmatically rejecting all of Husserl’s written work after the Logical Investigations. However, this understanding of the trajectory of the phenomenological movement ignores the extensive and intricate contours of the idealism-realism debate. In addition to helping us better interpret Husserl’s attempts to defend his idealism, reconsidering the idealism-realism debate elucidates the relationship and differences between Husserl's phenomenology and the broader landscape of early 20th century German philosophy, particularly the Munich phenomenologists and the Neo-Kantians. The contributions to this volume reconsider many of the early interpretations and critiques of Husserl, inviting readers to assess the merits of the arguments put forward by his critics while also shedding new light on their so-called “misunderstandings” of his idealism. This text should be of interest to researchers working in the history of phenomenology and Husserlian studies.

Rodney K. B. Parker is Assistant Professor of Philosophy at Dominican University College in Ottawa, Canada. He has previously held positions at the Universität Paderborn and the University of Western Ontario. He received his PhD in 2013 with his dissertation Husserl’s Transcendental Idealism and the Problem of Solipsism. Since then, he has published numerous translations and articles on the history of the phenomenological movement. He is also the co-editor of The New Yearbook for Phenomenology and Phenomenological Philosophy 16: Phenomenology of Emotions. Systematical and Historical Perspectives (2018) and Studia Phaenomenologica 15: Early Phenomenology (2015).