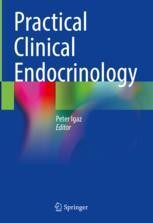 This practical book aims to cover the whole scope of clinical endocrinology, including both common and selected rare but important diseases, with an emphasis on practical clinical management.

A number of different questions and problems in clinical routine are discussed in this book in an unconventional format. Each topic begins with the presentation of a typical clinical case, and then the topic is approached in a question and answer format linked to the clinical case presented, highlighting the most important questions in diagnosis, differential diagnosis and therapy. Numerous figures and tables are included to help understanding.

The book is chiefly intended for doctors in training (preparing for boarding exam in endocrinology or internal medicine), but also for established clinicians who want to broaden or refresh their skills. University students of medicine can also find this book interesting.

Dr. Peter Igaz MD MSc PhD DSc holds degrees in medicine (1997), molecular biology (1999) and law (2005). Further, he has completed board exams in internal medicine (2002), endocrinology (2005) and clinical genetics (2008). He began working at the 2nd Department of Internal Medicine at Semmelweis University, Budapest, Hungary in 1997. Between Jul. 2016 and May 2020, he was the director of the Department. He is full professor of medicine since 2017.  From May 2020, he is the head of the Department of Endocrinology  at the Department of Internal Medicine and Oncology at Semmelweis University. His clinical focus is on clinical endocrinology including adrenal diseases, neuroendocrine tumors, multiple endocrine neoplasia syndromes and other rare genetic endocrine diseases, but he is familiar with several other aspects of endocrinology, as well. Under his leadership, the 2nd Department of Internal Medicine was awarded the Center of Excellence title of the European Neuroendocrine Tumor Society, and Dr. Igaz is a Co-Head of this Center. His research is mostly translational, focusing on microRNAs, genomics and bioinformatics in endocrine tumors, especially in adrenal tumors. Dr. Igaz has published over 150 papers, and has engaged in several collaborations with other research groups in e.g. Munich, Padova, Florence, Zurich, Rochester, and Zagreb. In 2003-2004, he worked as a postdoc in Lausanne, Switzerland, and in 2008, he spent 3 months pursuing endocrinological research in Paris.

He has broad expertise in education (both undergraduate and graduate), having given countless lectures to university students in three languages (English, German and Hungarian). He has edited two books with Springer: “Circulating microRNAs in disease diagnostics and their potential biological relevance” and most recently “Genetics of Endocrine Diseases and Syndromes”.