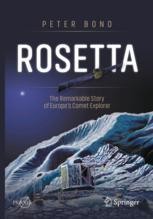 In 2014, Rosetta became the first mission to orbit a comet and to deploy a lander onto its surface. This is the story of ESA’s pioneering comet explorer, following the mission from its initial inception to its historic touchdown.

Read along as the Rosetta orbiter and its lander, Philae, evolve over the years, overcoming early mission hurdles before embarking on their one-way, decade-long voyage to a comet. See how the saga then culminates with Rosetta and Philae at last unveiling their icy target and achieving an unprecedented touchdown on its surface.

Award-winning space writer Peter Bond takes us behind the scenes of this historic endeavor, sharing insights from the international team of scientists and engineers who made the mission possible, describing the remarkable technology that they created, and delving into the treasure trove of scientific discoveries that followed.

Recounting in vivid detail the inner workings of Rosetta, this book is a celebration of the mission that has left a lasting impact on planetary science and space exploration.

Peter Bond is a lifelong space and astronomy enthusiast. He has written 12 books, including the award-winning “DK Guide to Space”, and has contributed to or acted as consultant / editor for many others. Peter has also written hundreds of articles on space and astronomy for British and American newspapers and magazines, as well as material for the Sunday Times “Window On The Universe” CD-ROM, the Nature-IOP “Encyclopedia of Astronomy and Astrophysics” and the Philips “Encyclopedia of Astronomy and Astrophysics”. He has appeared many times on TV and radio to comment on the latest astronomical discoveries and events. He was Space Science Advisor / Press Officer for the Royal Astronomical Society 1995-2007, and has been a consultant and writer for the European Space Agency for many years. He was consultant editor for “Jane's Space Directory" 2008-2018.