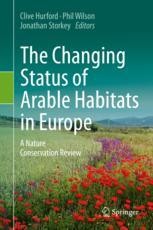 The Changing Status of Arable Habitats in Europe

This edited volume documents the current nature conservation status of arable habitats in Europe. Arable farming systems have evolved in the European landscape over more than ten thousand years and now occupy nearly 30% of the European land area.  They support species that have life cycles closely synchronised with traditional cereal growing, many of which have experienced massive declines throughout Europe. For example, in Britain, of the 100 plant species exhibiting the greatest declines in the latter half of the 20th century, 47 were typical of arable land.  Despite this the habitat and many of the species associated with it remains unprotected across much of Europe.

The 22 chapters cover a range of topics, including:

It is clear that the biodiversity of arable land throughout Europe has undergone major changes, particularly during the second half of the 20th century, and that these changes are continuing into the 21st century.  We need to develop a deeper appreciation of farmland wildlife and its integration into farming systems to ensure its future security in a world where value is increasingly expressed in terms of material profit.

Clive Hurford is a botanist who has worked in the field of nature conservation since the late 1970s, initially as an ornithologist with the Royal Society for the Protection of Birds and then as a botanical surveyor for the Countryside Council for Wales (CCW).  Since 1992 he has focused primarily on habitat monitoring and led a field team to demonstrate the links between conservation management and monitoring on Natura 2000 sites for an EU/CCW Life Project.  More recently he was ‘Conservation Monitoring Advisor for International Sites’ for CCW and Natural Resources Wales.  He is the lead editor / author of two edited volumes on monitoring nature conservation and regularly coordinates international workshops on the subject.  He has a long-standing interest in habitats with a cultural history, especially arable habitats.  After 27 years working for the Welsh conservation agencies, he is now the founder and director of Serapias; an ecological monitoring consultancy.

Dr Jonathan Storkey is a plant ecologist working in agro-ecosystems. His research focusses on applying ecological principles to the management and conservation of non-crop biodiversity in agricultural landscapes while maintaining crop productivity. Work in this area is increasingly showing that the ‘choice’ between managing arable habitats for optimal productivity or conservation of biodiversity is a false dichotomy and sustainable cropping systems cannot be maintained in the absence of a healthy ecosystem. Jonathan’s work on the drivers of declines in arable plant communities based on an understanding of the response plant traits and the implications for higher trophic groups is internationally recognized and  he is currently working with colleagues in the UK and Europe to use this knowledge to design more sustainable agricultural landscapes for the future.

Phil Wilson has been studying the ecology of Britain’s arable flora since the 1980s, and was awarded a PhD for his pioneering work on the conservation of this neglected group of plants in 1990.  He has continued this work to the present day, and has been involved in the design and monitoring of agri-environment scheme options for arable plants, has co-authored a field-guide, worked with Plantlife on methods for the assessment of Important Arable Plant Areas and runs regular training courses.  He has been a freelance vegetation ecologist for 30 years and has a comprehensive knowledge of British plant communities, their ecology and their management.  His work has also included investigations into the conservation ecology of a range of rare grassland plants.  He lives in the south-west of England and is the co-owner of a small farm with species-rich grassland managed by native breed cattle and sheep.