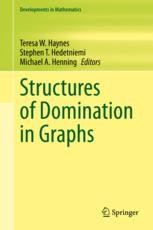 Structures of Domination in Graphs

The book is intended to provide a reference for established researchers in the fields of domination and graph theory and graduate students who wish to gain knowledge of the topics covered as well as an overview of the major accomplishments and proof techniques used in the field.

Teresa W. Haynes has focused her research on domination in graphs for over 30 years and is perhaps best known for coauthoring  the 1998 book Fundamentals of Domination in Graphs and the companion volume Domination in Graphs: Advanced Topics. She has also co-edited 2 volumes in Springer’s Problem Books in Mathematics  Graph Theory: Favorite Conjectures and Open Problems.  Haynes is also a co-author  of  the Springer Briefs in Mathematics  From Domination to Coloring: The Graph Theory of Stephen T. Hedetniemi.  Upon receiving her PhD from the University of Central Florida in 1988, she joined East Tennessee State University, where she is currently professor in the Department of Mathematics and Statistics.  Haynes has coauthored more than 200 papers on domination and domination-related concepts, which introduced some of the most studied concepts in domination, such as power domination, paired domination, double domination, alliances and broadcasts in graphs, and stratified domination.