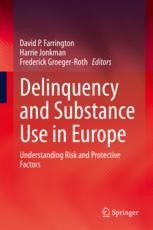 Delinquency and Substance Use in Europe

This book examines the use of “Communities That Care” (CTC) interventions in European countries. It reports results obtained by using the CTC Youth Survey in five European countries covering different parts of Europe – Great Britain, the Netherlands, Germany, Croatia, and Cyprus.  The main aim of the book is to compare (a) the prevalence of delinquency and substance use, (b) the prevalence of key risk and protective factors, and (c) the strength of relationships between risk and protective factors and delinquency and substance use, in these five European countries.


The chapters in this book compare similarities and differences between the countries, possible explanations of these, and the implications of the results for theories and for intervention policy and practice. Additionally, it provides evidence about the replicability over time and place of the strength of relationships between (i) risk and protective factors and (ii) delinquency and substance use. In turn, this increases confidence in the generalizability of criminological theories over time and place.

It will be of interest to researchers and practitioners in criminology and criminal justice, particularly those with an interest in developmental and life-course criminology, juvenile delinquency, and substance use, as well as crime prevention and intervention.

David P. Farrington, O.B.E., is Emeritus Professor of Psychological Criminology at Cambridge University. He has received the Stockholm Prize in Criminology and he has been President of the American Society of Criminology. His major research interest is in developmental criminology, and he is Director of the Cambridge Study in Delinquent Development, which is a prospective longitudinal survey of over 400 London males from age 8 to age 61. In addition to 837 published journal articles and book chapters on criminological and psychological topics, he has published 114 books, monographs and government publications, and 161 shorter publications (total = 1,112).

Harrie Jonkman studied sociology and educational studies and worked in the field of youth development and education. He works at the Verwey-Jonker Institute, a social research institute in the Netherlands. His work focuses on the social and cognitive development of children and young people, social determinants and prevention of health, developmental and behavioral problems. He was national project leader of the Community that Care strategy in the Netherlands, and supported this also in other countries. He supported prevention work in different countries, and worked in steering committees of educational institutes. At the Verwey-Jonker Institute he is involved in experiments and evaluations of social programs, longitudinal studies, and international comparative studies.

Frederick Groeger-Roth studied Sociology, Psychology and Political Sciences in Bielefeld and Berlin. He has researched on youth violence in deprived urban areas and worked for NGO’s on regional and national levels in the area of urban development. In 2009 he joined the Crime Prevention Council of Lower Saxony (CPC), located in the Ministry of Justice of Lower Saxony. He has headed the first Communities That Care pilot study in Germany, and is at present senior advisor for the CPC unit on community-based prevention. He was appointed to the expert advisory board of the German Forum for Crime Prevention and of the National Centre for Crime Prevention in Germany.