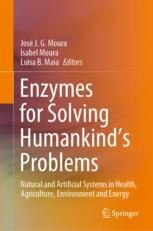 Natural and Artificial Systems in Health, Agriculture, Environment and Energy

This book presents specific key natural and artificial systems that are promising biocatalysts in the areas of health, agriculture, environment and energy. It provides a comprehensive account of the state of the art of these systems and outlines the significant progress made in the last decade using these systems to develop innovative, sustainable and environmentally friendly solutions.

This book provides an important and inspiring account for the designing of new natural and artificial systems with enhanced properties, and it appeals not only to students and researchers working in the fields of energy, health, food and environment, but also to a wider audience of educated readers that are interested in these up-to-date and exciting subjects.

José J. G. Moura is a Professor at the Department of Chemistry (LAQV, REQUIMTE), NOVA School of Science and Technology (Portugal), and his main research focuses on Bioinorganic Chemistry and the role of metals in Biology. He was previously a Research Specialist at the University of Minnesota (USA) and an Adjunct Professor at the University of Georgia, Athens (USA). He is also the Past President of the Chemistry Department and President of the Scientific Council at NOVA School of Science and Technology, a Portuguese Delegate to COST and INTAS, a member of Scientific Panel in the Calouste Gulbenkian Foundation and Portuguese National Grant Agency (FCT/MCTES), NST (US) Specialized Panel, and of several scientific editorial boards. In 2006, he was elected member of Academia das Ciências de Lisboa and, in 2010, elected President of the Society of Biological Inorganic Chemistry, for 2 years. He is also Director and Curator of FCT Library.

Isabel Moura is a Professor at the Department of Chemistry (LAQV, REQUIMTE), NOVA School of Science and Technology (Portugal), and her main research interests include structure-function of metalloproteins; application of biochemical and spectroscopic tools (NMR, EPR and Mössbauer); proteins involved in relevant bacterial metabolic pathways – nitrogen and sulfur biocycles; active sites containing copper, cobalt, haems, iron–sulfur centres; association of iron-sulfur centres with molybdenum, tungsten, nickel, sirohaem and flavins; and new type of clusters and new metal associations. She was previously a Visiting Professor at the University of Georgia, Athens (USA). During the period 2000/2011, she was the Head of the Chemistry Department of NOVA School of Science and Technology (Portugal) and the Director of the Associated Laboratory REQUIMTE for Sustainable Chemistry.

Luisa B. Maia holds a Ph.D. degree in Pharmaceutical and Clinical Biochemistry and presently is an Assistant Researcher at LAQV, REQUIMTE, NOVA School of Science and Technology (Portugal). She has a long-standing interest in reactive oxygen and nitrogen species and structure-activity relationships in metalloenzymes, having contributed to the elucidation of the mechanism of action of enzymes relevant to Human Health & Disease and also Climate/Bioenergy. Her recent efforts have been dedicated to the study of the novel human nitrate-nitrite-nitric oxide pathway, as well as, of bacterial enzymatic systems to convert carbon dioxide into added-value compounds.