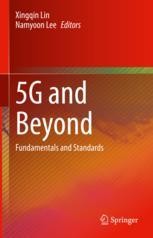 This book provides an accessible and comprehensive tutorial on the key enabling technologies for 5G and beyond, covering both the fundamentals and the state-of-the-art 5G standards. The book begins with a historical overview of the evolution of cellular technologies and addresses the questions on why 5G and what is 5G. Following this, six tutorial chapters describe the fundamental technology components for 5G and beyond. These include modern advancements in channel coding, multiple access, massive multiple-input and multiple-output (MIMO), network densification, unmanned aerial vehicle enabled cellular networks, and 6G wireless systems. The second part of this book consists of five chapters that introduce the basics of 5G New Radio (NR) standards developed by 3GPP. These include 5G architecture, protocols, and physical layer aspects. The third part of this book provides an overview of the key 5G NR evolution directions. These directions include ultra-reliable low-latency communication (URLLC) enhancements, operation in unlicensed spectrum, positioning, integrated access and backhaul, air-to-ground communication, and non-terrestrial networks with satellite communication.

Xingqin Lin is a Master Researcher and Standardization Delegate at Ericsson Research Silicon Valley, leading 5G/6G research and standardization in the areas of non-terrestrial communications and networking. He has contributed to 5G NR, NB-IoT, and LTE standards. He is an expert in wireless communications and technology strategy. He has been a frequent speaker, panelist, and technical contributor at conferences and workshops. He is co-author of the book “Wireless Communications and Networking for Unmanned Aerial Vehicles.” He served as an editor of the IEEE COMMUNICATIONS LETTERS from 2015-2018. He is serving as the Industry Liaison Officer for the IEEE ComSoc Emerging Technology Initiative on Aerial Communications. He holds a Ph.D. in electrical and computer engineering from The University of Texas at Austin, USA.

Namyoon Lee is an Associate Professor at POSTECH, Pohang, Gyeongbuk, Korea. He received a Ph.D. degree from The University of Texas at Austin, in 2014. He was with Communication and Network Research Group, Samsung Advanced Institute of Technology (SAIT), Korea, in 2008-2011 and was with Wireless Communications Research (WCR), Intel Labs, Santa Clara, USA, in 2015-2016. He is an expert in multi-antenna communication systems. He was a recipient of the 2016 IEEE ComSoc Asia-Pacific Outstanding Young Researcher Award. He has been serving as an Editor for both the IEEE TRANSACTIONS ON WIRELESS COMMUNICATIONS and the IEEE COMMUNICATIONS LETTERS from 2019.