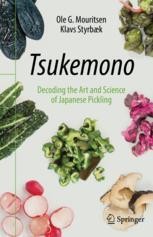 Decoding the Art and Science of Japanese Pickling

One of the best-kept secrets of Japanese cuisine is a range of side dishes known as tsukemono (つけもの, 漬物). The word, pronounced ‘tskay-moh-noh,’ means ‘something that has been steeped or marinated’ (tsuke—steeped; mono—things). Although tsukemono are usually made from vegetables, some fruits, flowers, and a few rhizomes are also preserved this way; it is, therefore, more accurate to characterize them as ‘pickled foods.’ Their preparation makes use of one or more conservation techniques, involving ingredients such as salt, sugar, vinegar, alcohol, and herbs, in combination with methods including dehydration, marinating in salt and acidic liquids, fermentation, and curing. The process of making tsukemono amounts to more than just a simple way of preserving otherwise perishable fresh produce. Apart from its nutritional value, the dish stimulates the appetite, provides delicious taste sensations, and improves digestion, all while remaining an elegant study in simplicity and esthetic presentation.

This book goes well beyond explaining the secrets of making crisp tsukemono. The authors discuss the cultural history and traditions associated with these pickled foods; provide recipes and outline techniques for preparing them at home with local ingredients; describe the healthful benefits and basic nutritional value to be found in the various types of pickles; and show how easy it is to serve them on a daily basis to stimulate the appetite or as condiments to accompany vegetable, fish, and meat dishes. The goal is to encourage the readers of this book to join us in a small culinary adventure that will allow us to expand and diversify our consumption of plant-based foods, which are so vital to our overall well-being. And along the way, there may be a few surprises.
Show all
About the authors

Ole G. Mouritsen is a research scientist and professor of gastrophysics and culinary food innovation at Copenhagen University. His work focuses on basic sciences and their applications within the fields of biotechnology, biomedicine, and food. He is the recipient of numerous prizes for his work and for research communication. His extensive list of publications includes several monographs, several of them co-authored with Klavs Styrbæk, which integrate scientific insights with culinary perspectives and have been nominated three times for Gourmand Best in the World Awards. Currently, Ole is president of The Danish Gastronomical Academy and director of the National Danish Taste Center "Taste for Life."

Klavs Styrbæk is a professional chef who owns and operates STYRBÆKS together with his wife, Pia. By combining a high standard of craftsmanship, sparked by curiosity-driven enthusiasm, he has created a gourmet center where the quality of the food and enjoyment of it are consistently excellent and where people can come to learn and take their culinary skills to a whole new level.

Jonas Drotner Mouritsen is a graphic designer and owner of the design company Chromascope that specializes in graphic design, animation, and film production. His movie projects have won several international awards. In addition, he has been responsible for layout, photography, and design of several books about food, some of which have been nominated for Gourmand World Cookbook Awards.

Mariela Johansen, who has Danish roots, lives in Vancouver, Canada, and holds an MA in Humanities with a special interest in ancient Greek law. Working with Ole and Klavs, she has translated several monographs, adapting them for a wider English language readership. Two of these," Umami: unlocking the secrets of the fifth taste" and "Mouthfeel: How Texture Makes Taste," won a Gourmand World Cookbook Award for the best translation of a cookbook published in the USA in 2014 and 2017, respectively.
Show all