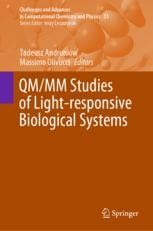 This book, a consecutive contribution to the series Challenges and Advances in Computational Chemistry and Physics, focuses on understanding the photoinduced processes in biological systems. Understanding and fine control of light fate in molecules is vital for the progress of society and environmental safety. Light induced changes of various physico-chemical and spectroscopic properties in nucleic acids and proteins is the basis of fundamental biological events such as vision, DNA photodamage or photosensing. The investigation of these processes is challenging to both theoretical and experimental studies. This volume encompasses the quantum mechanics/molecular mechanics theory in several subfields, including: advanced computational methods for nucleic acids and proteins systems; dynamics, spectroscopic and  physico-chemical properties of biological photoreceptors; DNA photodamage. This book is of interest to readers in both fundamental and application-oriented research by overviewing recent achievements in computational modeling of excited states in nucleic acids and proteins.

Tadeusz Andruniów received his Ph.D. in Chemistry from Jagiellonian University, Poland, in 1999. He did his postdoctoral trainings at the University of Louisville, USA, with Professor Pawel M. Kozlowski and at CNRS in Nancy, France, with Dr. Fabrice Leclerc. In 2002 he was awarded a Marie Curie Individual Fellowship from the European Community to become a research staff member of Professor's Massimo Olivucci group at the University of Siena, Italy. He joined the Wroclaw University of Science and Technology, Poland, in 2005. In 2008 he received his habilitation degree in Biophysics from Jagiellonian University. He is currently Professor of Chemistry at the Faculty of Chemistry of Wroclaw University of Science and Technology. He is also the vice-Head of the Advanced Materials Engineering and Modeling Department. His research deals with the application of computational chemistry methods for understanding the molecular basis of photoinduced processes in biological systems.

Massimo Olivucci received his PhD in 1989 with a dissertation in Theoretical Organic Chemistry at the University of Bologna (Italy) written under the supervision of Fernando Bernardi. Shortly after, he moved to the UK to carry out his postdoctoral research with Michael A. Robb at King’s College London. He started his independent academic career in 1992 at the University of Bologna, ultimately becoming full professor of Organic Chemistry at the University of Siena, Italy in 2001. In 2006 he was also appointed Research Professor at the Centre for Photochemical Sciences, Bowling Green State University, USA, where he is in charge of the Laboratory for Computational Photochemistry and Photobiology. From 2015 to 2017 he was a fellow of the Institute for Advanced Studies of the University of Strasbourg, France. In 2019 he was awarded the Doctoris Honoris Causa at the Aix-Marseille University, France. His most recent work focuses on two research lines: the investigation of the light energy conversion processes in biological photoreceptors and the design of biomimetic photo-driven molecular switches/rotary motors. The development of fully automated QM/MM hybrid computational methodologies is also part of his current research activity.