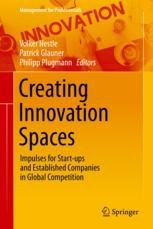 Impulses for Start-ups and Established Companies in Global Competition

This book offers fresh impulses from different industries on how to deal with innovation processes. Authors from different backgrounds, such as artificial intelligence, mechanical engineering, medical technology and law, share their experiences with enabling and managing innovation. The ability of companies to innovate functions as a benchmark to attract investors long-term. While each company has different preconditions and environments to adapt to, the authors give guidance in the fields of digitalization, workspaces and business model innovation.

Volker Nestle has an engineering background in precision and micro technologies and worked many years for Festo SE & Co. KG as a research engineer before he joined an Executive Master of Business Innovation program and consecutive doctoral studies at the EBS University in Oestrich-Winkel. In 2010 he received his doctoral degree for his research about Open Innovation processes in technology clusters. Until the end of 2016, he was Head of Research Future Technology at Festo and subsequently joined TRUMPF GmbH + Co. KG as Head of Corporate Research and Development. In 2018, Volker Nestle received his honorary professorship for Innovation and Technology Management at the EBS University. In July 2020, Volker Nestle switched back to Festo SE & Co. KG to build up the new business unit for LifeTech/Medical Technologies as Head of Product Development. Since 2014, Volker Nestle is also Chairman of the Board of Hahn-Schickard-Gesellschaft for applied research, running three research institutes for application-oriented research on innovative solutions in microtechnologies. Beyond his activities in technology and trend scouting for production technologies his current fields of interest are about the implications of digitization on medical technologies and the subsequent transformation in business innovation and the working environment.

Patrick Glauner is the Founder & CEO of skyrocket.ai GmbH, an artificial intelligence consulting firm based in Bavaria, Germany. In parallel, he is a Full Professor of Artificial Intelligence at Deggendorf Institute of Technology, a position he is honored to hold since the age of 30. His research on AI was featured in New Scientist and cited by McKinsey and others. He is also an Area Editor of the International Journal of Computational Intelligence Systems (IJCIS). Previously, he held managerial positions at the European Organization for Nuclear Research (CERN), at Krones Group and at Alexander Thamm GmbH. He studied at Imperial College London and also holds an MBA. He is an alumnus of the German National Academic Foundation (Studienstiftung des deutschen Volkes).

Philipp Plugmann has been doing multidisciplinary work for the last 20 years in parallel to practicing as a dentist in his own clinic in Leverkusen, Germany. He is also a Full Professor for Interdisciplinary Periodontology and Prevention at SRH University of Applied Health Sciences. His first book on innovation in medical technology published in 2011 was reviewed by Cisco. His second book on innovation published with Springer in 2018 got more than 50,000 chapter downloads in its first fifteen months. Previously, he held multiple adjunct faculty appointments for more than twelve years and has won multiple teaching awards. He also holds an MBA, an MSc in Business Innovation, an MSc in Periodontology and Implant Therapy (DGParo) and is currently pursuing his third doctorate. Plugmann has given research talks in the field of innovation at Conferences at Harvard Business School, Berkeley Haas School of Business, Max Planck Institute for Innovation and Competition, and Nanyang Tech University, Singapore. Plugmann is a serial entrepreneur and advisor to several companies, including a global technology consultancy - DataArt.