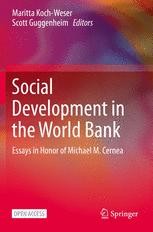 Social Development in the World Bank

This open access book honors the work of Michael Cernea, who was the World Bank’s first professional sociologist, by taking on and extending his arguments for "putting people first.” Cernea led a community of social scientists in formulating and promoting a comprehensive set of innovative and original social policies on development issues, which the World Bank adopted and implemented. This book includes globally significant work on urban and rural development, the epistemology of using social science knowledge in national and international development, methodologies for using social organization for more effective poverty reduction, and the experience of crafting social policies to become normative frameworks for purposive collective social action. And by including contributions from senior policy makers in the World Bank who helped shepherd social science's entry into development policy and practice, it provides a unique look at how organizational change can happen.

Maritta R. von Bieberstein Koch-Weser is an anthropologist and environmentalist with a PhD from the Universities of Bonn and Cologne, Germany. She also received an honorary doctorate from Oxford Brookes University, UK, in 2010. Early in her career she taught anthropology and Latin American studies at George Washington University in Washington, DC, and conducted extensive fieldwork in Brazil. One of the World Bank´s first social scientists, she served for 20 years as a project officer and in various senior management positions in South and East Asia, Sub-Saharan Africa, the Middle East, Eastern Europe, various countries of the former Soviet Union, and Latin America. She also helped establish the Global Environmental Facility (GEF) at the World Bank, has headed a number of the bank’s Environment Programs in the Asia Region, and was Director of Environmental and Socially Sustainable Development for the Latin America and Caribbean Region. After leaving the World Bank, Koch-Weser served as Director General of the World Conservation Union (IUCN) in Gland, Switzerland. She is the founder and President of Earth3000, a non-profit organization established in 2001, which supports strategic innovations in governance for environment and development. She also leads the University of São Paulo, Institute of Advanced Studies’ program Amazonia em Transformação: História e Perspectivas.

Scott Guggenheim received his PhD from the John Hopkins University and became a full staff anthropologist at the World Bank in 1989. Moving to Indonesia in 1994, Guggenheim and his team developed the nationwide community development program described in the book, which has since been replicated in East Timor, Philippines, Afghanistan, Myanmar and elsewhere. Dr. Guggenheim served as Senior Development Adviser to the Office of the President, Islamic Republic of Afghanistan, from 2014-2018. He is currently an Adjunct Professor at Georgetown University in Washington, DC. His publications include Power and Protest in the Countryside (with Robert Weller), Anthropological Approaches to Involuntary Resettlement: Policy Practice, and Theory (with Michael Cernea), "Development and Dynamics of Displacement"; "Cock or Bull: Cockfighting and Social Change in the Philippines" (Filipinas); and "Compadrazgo, Baptism and the Symbolism of a Second Birth" (with Maurice Bloch, Man).