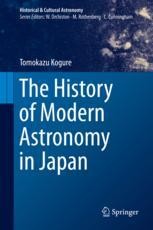 The History of Modern Astronomy in Japan

This book considers the history of modern astronomy and astrophysics in Japan by comparing with the development of astrophysics in western countries. Astrophysics essentially arose in three separate fields: astronomical spectroscopy, stellar structure, and survey of celestial objects.

This book introduces readers to the state of astronomy back to the Tokugawa era (18th – 19th centuries), when the chief task of astronomers was limited to the calendar making. With the so-called Meiji revolution (1868), the situation drastically changed. The Meiji Government promoted the modernization of Japan by hiring numbers of foreign instructors in political, social, and cultural affairs, including Construction of Observatory and University. Then the foreign studies of Japanese researchers lasted for many years. After the Second World War, Japan experienced great social and economical growth allowing the constructions of large optical, radio, and space instruments. With this background astrophysics progressed and eventually flourished. The book ends by highlighting Japanese contributions to international collaboration up to the early 21st century.

Readers of this book will understand how astrophysics has grown into one of the major sciences in Japan, and how the works of individual astronomers are contributing to the global advancement of knowledge of the universe.

Kogure Tomokazu has been Professor Emeritus of Kyoto University since 1990. He obtained his Doctor of Science degree from the Department of Astronomy at Kyoto University in 1961. From 1966 to 1967 he pursued the spectroscopic study of Be stars at Paris Observatory’s Meudon laboratory. In 1976, after spending 6 years as a professor of physics at Ibaraki University, he returned to Kyoto University as a professor of galactic astronomy. His research fields include: the spectroscopic study of Be stars, interstellar gas dynamics, the physics of star forming regions, and the history of astrophysics. He has written several books, such as “Interstellar Physics”,1994,  Goto shobo (in Japanese). “Emission Line Stars”, 2002, Goto Shobo (in Japanese), “Astrophysics of Emission-Line Stars” , (co-work with Kam Ching Leon),2007,  Springer, and “History of Modern Astronomy – The rise of astrophysics and pioneers―”, 2015,  Kyoto University Press (in Japanese).