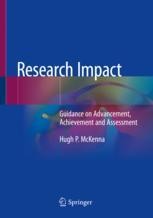 Guidance on Advancement, Achievement and Assessment

Research for research sake is no longer tenable or affordable; to be valuable to society, research must have impact! This textbook takes the reader on a journey from how the UK Research Excellence Framework assesses impact to real examples of outstanding research impact case studies.  Along the way, Prof. Hugh McKenna describes and explains the case for research impact, the challenges, the link between research impact and evidence informed practice, achieving impact through changing policy and engaging with the public, how researchers can make their research findings more impactful and how research impact is assessment nationally and internationally

It is written in an easily accessible and understandable style, with reflective exercises amply distributed throughout its pages and helpful guides helping to engage readers and notably health professionals who are often turned off by the normal heavy research tomes. This book makes the complex simple and the wearisome fascinating. The short chapters are interesting and authoritative and can be read on a ‘standalone’ basis, allowing readers to ‘dip in and out’.

From his experience in various countries, the author has a unique insight into what research impact is, how it is assessed and how and where research findings can have the most benefit. The stimulus for this book has been the excellent feedback that the author has received from health professionals, students and fellow researchers.  There is always a risk that good knowledge and experience do not transfer well into a good textbook. In Research Impact: Guidance on Advancement, Achievement and Assessment, nothing has been lost in the transition.

The book will be of great interest to many health researchers from nursing to midwifery, pharmacy, medicine or any allied health professional, but also to any research manager in all professions  who want their research to bring positive change to society, culture, the economy, health and quality of life. It will be of particular interest to those who want to understand the difference between research impacts that are weak and those that are outstanding and how such assessments are made.

Professor Hugh McKenna, CBE, PhD, B.Sc (Hons), RMN, RGN, RNT, DipN(Lond), AdvDipEd, FFN RCSI, FEANS, FRCN, FAAN., M.A.E is a general and psychiatric nurse by background and was recently Dean of Medical School Development at Ulster University, UK. Prior to this he had overall responsiblity for Research and Impact at Ulster University. He has over 250 publications, including 16 books. He was awarded Commander of the British Empire (CBE) for his work on health and community and is a Fellow of four prestigious organisations. In 2013, he was presented with the Outstanding Achievement Award by the Royal College of Nursing and in 2014, he was presented with a lifetime achievement Award at the Institute of Psychiatry. In a 2018 Government report he was named as one of the 70 most influential nurses in the 70 year history of the NHS.

Currently, he is an Adjunct/Visiting Professor in universities in Slovenia and Australia. In 2014, he chaired the UK Research Excellence Framework panel for Pharmacy, Dentistry, Allied Health Professions, Biomedical Sciences, Nursing and Midwifery. He chairs the same panel for the next REF. He has also chaired a clinical health research quality panel for the Swedish Research Council and panels for the Hong Kong Council for Accreditation. He is chair of Inspire Wellbeing, the largest mental health, learning disability and addiction charity on the island of Ireland. Recently he received an Honorary Doctorate from Edinburgh Napier University and the University of Maribor.

In 2019, he was appointed to the Academia Europaea, founded as an initiative of The Royal Society to be the official scientific advisory body for the EU. He is a Trustee for the Alzheimer’s Society UK and a non-executive director for a large health and social care trust. He has presented papers and conducted workshops on research impact in numerous countries on five continents.