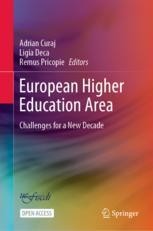 This open access book presents the major outcomes of the fourth edition of the Future of Higher Education – Bologna Process Researchers Conference (FOHE-BPRC 4) which was held in January 2020 and which has already established itself as a landmark in the European higher education environment. The conference is part of the official calendar of the European Higher Education Area (EHEA) for events that promote and sustain the development of EHEA. The conference provides a unique forum for dialogue between researchers, experts and policy makers in the field of higher education, all of which is documented in this proceedings volume.

The book focuses on the following five sub-themes:

- Challenges in the EHEA

- Access and Success for Every Learner in Higher Education

- Advancing Learning and Teaching in the EHEA: Innovation and Links With Research

- The Future of the EHEA - Principles, Challenges and Ways Forward

While acknowledging the efforts and achievements so far at EHEA level, the Paris Ministerial Communiqué highlights the need to intensify crossdisciplinary and cross-border cooperation. One of the ways to achieve this objective is to develop more efficient peer-learning activities, involving policymakers and other stakeholders from as many member states as possible for which this book provides a platform. It acknowledges the importance of a continued dialogue between researchers and decisionmakers and benefits from the experience already acquired, this way enabling the higher education community to bring its input into the 2020.

This book is published under an open access CC BY license.

Adrian Curaj is a former minister of education, science and innovation in Romania. He is the head of the UNESCO Chair on Science and Innovation Policies at the National University of Political Sciences and Public Administration and professor at the Politehnica University of Bucharest. Adrian Curaj has been working as a consultant with World Bank, UNESCO, UNIDO, ETF and EC for studies in Tertiary Education, Science and Innovation, and Foresight. He has been actively involved as project leader, country or group leader and expert in many research projects, most of them in research management, higher education management and foresight, areas where he also published scientific articles and books.. He has been the initiator and co-chair of the Bologna Process Researchers Conferences (2011, 2014, 2017, 2020). Adrian Curaj was member of the Board of Directors of the U.S. Fulbright Commission in Romania and the Romanian representative at the Bologna Follow-Up Group.  Also, professor Curaj is member of the Romanian Association for the Club of Rome, member of the Romanian National Commission for UNESCO and fellow to the World Academy of Art & Science (WAAS).

Ligia Deca is currently the Presidential Adviser for Education and Research within the Romanian Presidential Administration. In this capacity, she also coordinates the “Educated Romania” National Project.

She graduated a PhD program in Political Sciences and Educational Policies at the University of Luxembourg and was a research fellow at the „New Europe College”, with a focus on internationalization of higher education.

Author of several papers and studies in the field of educational policies, Deca also worked as an expert for the Council of Europe, European Commission, EQAR, DAAD etc. In 2014 she was a member of the ‘Science in Education’ Expert Group set-up by the European Commission and in 2019 she was chosen as an evaluating expert for the European Universities pilot project. Ligia Deca is also a member of the Board of Directors at Fulbright in Romania, since 2017.

Remus Pricopie, PhD, is the rector of the National University of Political Studies and Public Administration (SNSPA) and former Romanian Minister of National Education. His activity within the Romanian Ministry of National Education began in 1996, and includes positions such as Spokesperson, Secretary General, and Deputy Minister – (Secretary of State) for Higher Education, International Relations and Teacher Training. Dr. Pricopie is also professor of public relations and public communication at the National University of Political Science and Public Administration in Bucharest (SNSPA). He has been elected rector of the SNSPA in March 2012, a position he occupied until he was appointed minister of education.

Dr. Pricopie has a PhD in Political Science at the SNSPA and he is a Millennium Fulbright alumnus. His educational background includes a rich international experience especially in the United States of America and the European Union. Dr. Pricopie has been Chair of the Task Force on Fostering and Building Human Capital (FBHC) of the Regional Cooperation Council (RCC)and President of the Board of Directors of the Romanian-US Fulbright Commission, to name just a few of the significant activities of representation he carried out during his professional career. The activity of Dr. Pricopie encompasses trans-disciplinary research in the areas of higher education management, internationalization of higher education, public communication, public participation and collaborative public management.