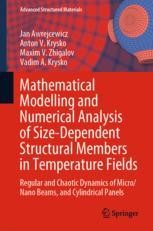 Regular and Chaotic Dynamics of Micro/Nano Beams, and Cylindrical Panels

This book is devoted to researchers and teachers, as well as graduate students, undergraduates and bachelors in engineering mechanics, nano-mechanics, nanomaterials, nanostructures and applied mathematics. It presents a collection of the latest developments in the field of nonlinear (chaotic) dynamics of mass distributed-parameter nanomechanical structures, providing a rigorous and comprehensive study of modeling nonlinear phenomena. It is written in a unique pedagogical style particularly suitable for independent study and self-education. In addition, the book achieves a good balance between Western and Eastern extensive studies of the mathematical problems of nonlinear vibrations of structural members.