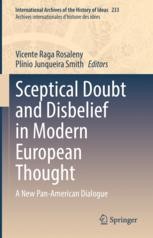 The book includes a look both at the relationship between Montaigne and Pascal and at Montaigne’s criticism of religious rationalism. It turns its attention to an investigation into the links between ancient scepticism and Bacon’s Doctrine of the Idols, as well as into the ancient problem of the criterion in Cartesian philosophy. Next, three essays focus on more general topics, like modern sceptical disturbances, clandestine literature and irreligion. Two essays investigate the role of scepticism in Bayle’s moral thinking and his theory of religious toleration. Hume’s sceptical philosophy is the subject of two papers by distinguished scholars. In addition, many contributors address the presence of scepticism in Kant and in the German Idealism, such as the role of Schulze's scepticism in the works of the young Hegel. The book closes with a paper on Nietzsche and scepticism, and an essay on the role of Popkin’s and Schmitt’s works on modern scepticism.

This collection continues along a rich, fruitful path opened by Richard H. Popkin and pursued by many important scholars, like Gianni Paganini, John-Christian Laursen, and José Raimundo Maia Neto. It re-establishes that necessary dialogue between researchers of scepticism from all over the Americas, which began with Popkin, Oswaldo Porchat and Ezequiel de Olaso long ago. This insightful reflection on modern European scepticism will also serve as an important resource in the history of modern philosophy.

Vicente Raga Rosaleny is an associate professor of History of Modern Philosophy at the Department of Philosophy, Universidad Nacional de Colombia (Bogotá, Colombia). His research deals with the history of early modern philosophy, with particular emphases on Montaigne, Descartes and modern scepticism. His recent publications include a book on Montaigne's scepticism published by the University of Antioquia in 2016 and an introduction to contemporary problems in the Theory of Knowledge, also published by the UdeA in 2017.

Plínio Junqueira Smith is professor of History of Modern Philosophy and Theory of Knowledge at Universidade Federal de São Paulo (Brazil). He has published many books on the history of scepticism, as well as many papers on scepticism, the history of modern philosophy, and analytical theory of knowledge (both in international journals and anthologies, including Scepticism in the Eighteenth Century. Enlightenment, Lumières, Aufklarüng, Dordrecht, Springer, 2013, and Academic Scepticism in the Development of Early Modern Philosophy, Dordrecht, Spriner, 2017 (both with Sébastien Charles). He translated Malebranches’s De la recherche de la vérité into Portuguese.
Show all