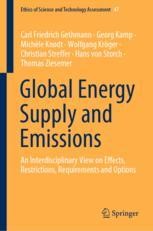 An Interdisciplinary View on Effects, Restrictions, Requirements and Options

This book offers an authoritative analysis of the state-of-the art in energy and climate research and policy. It starts by describing the current status of technologies that are expected to have an influence on the energy systems of the future. For an adequate evaluation, it presents the latest findings on the effects of energy supply and consumption as well as of the emissions on both the environment and people’s health. This is followed by an extensive discussion of the economic and social problems related to climate change, the need for energy transitions, and other issues that may require public investment and international agreements. The book reviews the problem of energy policy from a global perspective, providing readers with the technical, political, economic and ethical background needed to understand the current situation and work at better solutions for a sustainable, just and prospering world.

Georg Kamp, Dr. phil., carried out an apprenticeship and worked as a retail salesman between 1979–1984. In 1987–1993, he was studying Philosophy, German Literature and Linguistics in Bochum, Duisburg and Essen. From 1993 to1998, he served as a scientific assistant at the Institut für Philosophie at the Universität Duisburg-Essen. In 1998, he completed his Ph.D. studies at the University of Essen with a thesis about logics in normative contexts. From 1999 to 2002 he served as a member of the scientific staff of the Europäische Akademie zur Erforschung von Folgen wissenschaftlich-technischer Entwicklungen GmbH, in Bad Neuenahr-Ahrweiler, Germany. In 2002–2005, he worked as a freelance consultant, lecturer and editor. Since 2005, he has been active as a scientific coordinator, participant and manager of numerous interdisciplinary projects on sustainability and energy topics. He was a staff member of the Niederrhein University of Applied Sciences (2005–2006), and of the Europäische Akademie in Bad Neuenahr-Ahrweiler (2006–2015). Since 2015, he has been a staff member of the Jülich Research Centre.

Michèle Knodt, Prof. Dr. phil. habil., studied political sciences at Technische Universität Darmstadt (TU Darmstadt) and completed there her Master in political science in 1992. She received her Dr. phil. from the University of Mannheim in 1997, and worked as a research assistant at the Mannheim Center for European Social Research (MZES) (1997-2000). Shecompleted her Habilitation in political sciences in 2005 at the University of Mannheim. In 2000, she was appointed Assistant Professor at the University of Mannheim. In 2005 she obtained a Full Professorship from TU Darmstadt, where she has been serving as a Professor for Comparative Politics and European Integration to date. She was a guest professor at University of Massachusetts Boston, USA (1998), at the Institut d'Etudes Politiques de Lille, University of Lille, France (2003), at the Institute for Advanced Studies (IHS), University of Vienna, Austria (2007), and at the University of Pondicherry, India (2010). In 2011, Professor Knodt was awarded with a Jean Monnet Chair ad personam from the European Commission. She is Director of the Jean Monnet Centre of Excellence “EU in Global Dialogue” (CEDI), Vice-Director of the Energy Center (German: Profilbereich Energiesysteme der Zukunft) at TU Darmstadt, Co-Leader of the Loewe Centre of Excellence “emergenCITY” at TU Darmstadt as well as Co-Leader of the DFG Research Training Group (GRK) KRITIS. She is currently leading the Cost Action ENTER “EU Foreign Policy Facing new Realities” (17119). She is also the President of the German European Community Studies Association (ECSA-Germany) and has been leading several international and interdisciplinary projects supported by DFG, VW foundation, EU Commission, BMBF, BMWI, among others. She published around 50 peer-reviewed journal articles, co-authored 8 monographs, co-edited 16 books and wrote more than 100 chapters in edited volumes. Her main fields of research include energy governance, EU multi-level governance, energy transition and participation.

Wolfgang Kröger, Professor Dr.-Ing. habil. studied mechanical engineering, specializing on nuclear technology, at the RWTH Aachen. He completed his diploma degree in 1972, his doctoral degree in 1974 and the habilitation in 1986. From 1974 to 1989, he worked at the Institute for Nuclear Safety Research at the German Research Center Jülich, leading research projects aimed at the development of advanced reactor concepts, and on related methods for comprehensive safety assessment. In 1990, he became Full professor of safety technology at the ETH Zurich. Simultaneously, he was appointed director of the Research Department on Nuclear Energy and Safety at the Swiss National Paul Scherrer Institut (PSI). At ETH, as director of the Laboratory of Safety Analysis, he contributed to the development of risk and vulnerability analysis methods of complex cyber-physical systems, including energy supply infrastructure. He has been approaching risk assessment and interdependence issues in a multidisciplinary, trans-sectorial way, and shaped the concept of sustainability and resilience. On his initiative, the International Risk Governance Council was established in Geneva in 2003, and he became the Founding Rector. After his retirement in 2011, he was nominated Executive Director of the ETH Risk Center. Professor Kröger is currently working as a senior scientific advisor and member of distinguished national and international committees, such as the Swiss Academy of Engineering Sciences (SATW), the International Review Group of the Japanese Nuclear Safety Institute (JANSI), and the project of 'energy systems of the future'(ESYS). Senior Fellow of the Institute for Advanced Sustainability Studies (IASS) Potsdam, Distinguished Affiliated Professor at TU Munich, he is also author and co-author of numerous publications, including books.

Hans von Storch, Professor Dr. rer. nat. Dr. h.c. is Director emeritus of the Institute of Coastal Research of the Helmholtz Zentrum Geesthacht (HZG), Professor at the University of Hamburg and Guest Professor at the Ocean University of China (Qingdao). From 1987 - 1995, he was Senior Scientist and leader of the Statistical Analysis and Modelling Group at the Max Planck-Institute for Meteorology. He also served as director of the Institute of Coastal Research. His research interests included climate diagnostics and statistical climatology, and regional climate change and its transdisciplinary context. He published twenty books, including “Statistical Analysis in Climate Research”, co-authored with Francis Zwiers and “Die Klimafalle” (English: The Climate Trap), co-authored with the ethnologist Werner Krauss. He also authored numerous articles. Editor-in-chief of the Oxford Research Encyclopedia of Climate Science, Oxford University Press, he is also a member of a number of editorial and advisory boards.  He was the lead author of Working Group I of the Third Assessment Report and of Working Group II of the Fifth Assessment Report of the Intergovernmental Panel on Climate Change (IPCC), and chaired the efforts for a climate change assessment for the Baltic Sea Catchment (BACC II). Professor Hans von Storch is also a foreign member of the Polish Academy of Sciences, and holds an honorary doctorate from the University of Göteborg. The significance of his work was also recognized with the Order of Merit of the Federal Republic of Germany in 2019.

Christian Streffer, Professor em. Dr. rer. nat. Dr. med. h. c., studied Chemistry and Biochemistry at the universities of Bonn, Tübingen, Munich, Hamburg and Freiburg. He received his Ph.D. in Biochemistry in 1963. He was a Postdoctoral fellow at the Department of Biochemistry, University of Oxford. In 1971, he was appointed Professor for Radiobiology at the University of Freiburg, Germany. From 1974 to 1999, he served as a full Professor for Medical Radiobiology at the University of Essen. During 1988–1992, he was vice chancellor of the same University, and received the title of Emeritus in 1999. He was Guest Professor at the University of Rochester N.Y., USA in 1985, and at the University of Kyoto, Japan, in 2000. As an Honorary Member of several scientific societies, he received an Honorary Doctor from the University of Kyoto in 1995. Professor Streffer is a member of the Institute for Science and Ethics of the University of Bonn, and an Emeritus member of the International Commission on Radiological Protection (ICRP). He received several scientific awards, such as: the Roentgen Plakette (English: Roentgen Medal) by the City of Remscheid (1985), a prize awarded to people who have made great contributions to the progress and usage of x-ray in science and practice; the Bacq‑Alexander‑Award of the European Society for Radiation Biology in 1996; the Sievert Award of the International Radiation Protection Association (IRPA) in 2008; and the Distinguished Service Award of the Radiation Research Society, USA. in 2009. Professor Streffer’s main research interests include: radiation risk, especially during the prenatal development of mammals; genomic instability after radiation exposure; combined effects of radiation and chemical substances; experimental radiotherapy of tumours and especially individualization of cancer therapy by radiation.

Thomas Ziesemer, Professor Dr. rer. pol. has been serving as an Associate Professor of Economics at Maastricht University, the Netherlands, since December 1996. After studying Economics at the Universities of Kiel (1974–1975) and Regensburg (1975–1978), in Germany, he was employed at the University of Regensburg (1982 to 1989), where he completed his doctoral dissertation on the topic of “Economic Theory of Underdevelopment” in 1985. Starting in December 1989, he has been successively appointed Assistant Professor of International Economics, Associate Professor of Microeconomics, and Associate Professor of Economics, from the School of Business and Economics at Maastricht University. In November 1996 he completed his “Habilitation” at the Freie Universitaet Berlin. He also serves as a Senior Researcher at United Nations University - Maastricht Economic and Social Research Institute on Innovation and Technology UNU-MERIT. His ﬁelds of interest include Development, International and Environmental Economics, Growth and Technical Change.