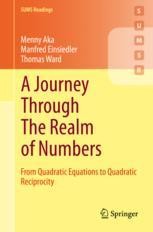 A Journey Through The Realm of Numbers

From Quadratic Equations to Quadratic Reciprocity

This book takes the reader on a journey from familiar high school mathematics to undergraduate algebra and number theory. The journey starts with the basic idea that new number systems arise from solving different equations, leading to (abstract) algebra. Along this journey, the reader will be exposed to important ideas of mathematics, and will learn a little about how mathematics is really done.

Starting at an elementary level, the book gradually eases the reader into the complexities of higher mathematics; in particular, the formal structure of mathematical writing (definitions, theorems and proofs) is introduced in simple terms. The book covers a range of topics, from the very foundations (numbers, set theory) to basic abstract algebra (groups, rings, fields), driven throughout by the need to understand concrete equations and problems, such as determining which numbers are sums of squares. Some topics usually reserved for a more advanced audience, such as Eisenstein integers or quadratic reciprocity, are lucidly presented in an accessible way. The book also introduces the reader to open source software for computations, to enhance understanding of the material and nurture basic programming skills. For the more adventurous, a number of Outlooks included in the text offer a glimpse of possible mathematical excursions.

This book supports readers in transition from high school to university mathematics, and will also benefit university students keen to explore the beginnings of algebraic number theory. It can be read either on its own or as a supporting text for first courses in algebra or number theory, and can also be used for a topics course on Diophantine equations.

Menny Aka studied at the Hebrew University, with a Ph.D. in 2012 under Alexander Lubotzky. He held research positions at EPFL and ETH Zürich before becoming a senior scientist at ETH Zürich. He works on the interaction between number theory, ergodic theory and group theory. An enthusiastic and innovative lecturer, he is interested in making mathematics accessible, especially to younger audiences. He has initiated and taught in various programs for high school students, including projects aimed at gifted students and prospective undergraduates. He is interested in showcasing the beauty and simplicity underpinning complex mathematical ideas.

Manfred Einsiedler studied at the University of Vienna, with a Ph.D. in 1999 under Klaus Schmidt. He held research positions at the University of East Anglia, Penn State University, the University of Washington, and Princeton University as a Clay Research Scholar. After becoming a Professor at Ohio State University he joined ETH Zürich. In 2004 he won the Research Prize of the Austrian Mathematical Society, in 2008 he was an invited speaker at the European Mathematical Congress in Amsterdam, and in 2010 he was an invited speaker at the International Congress of Mathematicians in Hyderabad. He works on ergodic theory (especially dynamical and equidistribution problems on homogeneous spaces) and its applications to number theory. He has collaborated with Grigory Margulis and Akshay Venkatesh. With Elon Lindenstrauss and Anatole Katok, Einsiedler proved that a conjecture of Littlewood on Diophantine approximation is "almost always" true.