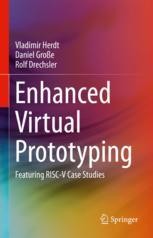 This book presents a comprehensive set of techniques that enhance all key aspects of a modern Virtual Prototype (VP)-based design flow. The authors emphasize automated formal verification methods, as well as advanced coverage-guided analysis and testing techniques, tailored for SystemC-based VPs and also the associated Software (SW). Coverage also includes VP modeling techniques that handle functional as well as non-functional aspects and also describes correspondence analyses between the Hardware- and VP-level to utilize information available at different levels of abstraction. All approaches are discussed in detail and are evaluated extensively, using several experiments to demonstrate their effectiveness in enhancing the VP-based design flow. Furthermore, the book puts a particular focus on the modern RISC-V ISA, with several case-studies covering modeling as well as VP and SW verification aspects.

Daniel Große received the Dr.-Ing. degree in computer science from the University of Bremen in 2008. He remained as a Post-Doctoral Researcher with the Group of Computer Architecture, University of Bremen. In 2010, he was a substitute Professor for computer architecture with Albert‐Ludwigs University, Freiburg im Breisgau, Germany. From 2013 to 2014, he was the CEO of the EDA start-up solvertec focusing on automated debugging techniques. Since 2015, he has been a Senior Researcher with the University of Bremen and at the German Research Center for Artificial Intelligence (DFKI), and also the Scientific Coordinator of the Graduate School of System Design, funded within the German Excellence Initiative. Since July 2020, he is a full professor at the Johannes Kepler University Linz, Austria, where he is the head of the group from Complex Systems. His current research interests include verification, virtual prototyping, debugging, and synthesis. He published over 130 papers in peer-reviewed journals and conferences in the above areas. Dr. Große served in program committees of numerous conferences, including DAC, DATE, ICCAD, CODES+ISSS, FDL, and MEMOCODE. He received best paper awards at FDL 2007, DVCon Europe 2018, and ICCAD 2018. He is an IEEE Senior Member.

Rolf Drechsler received the Diploma and Dr. phil. nat. degrees in computer science from the Johann Wolfgang Goethe University in Frankfurt am Main, Germany, in 1992 and 1995, respectively. He worked at the Institute of Computer Science, Albert-Ludwigs University, Freiburg im Breisgau, Germany, from 1995 to 2000, and at the Corporate Technology Department, Siemens AG, Munich, Germany, from 2000 to 2001. Since October 2001, Rolf Drechsler is Full Professor and Head of the Group of Computer Architecture, Institute of Computer Science, at the University of Bremen, Germany. In 2011, he additionally became the Director of the Cyber-Physical Systems Group at the German Research Center for Artificial Intelligence (DFKI) in Bremen. From 2008 to 2013 he was the Vice Rector for Research and Young Academics at the University of Bremen. Since 2018 he is the Dean of the Faculty of Mathematics and Computer Science. Rolf Drechsler was a member of Program Committees of numerous conferences including e.g., DAC, ICCAD, DATE, ASP-DAC, FDL, MEMOCODE, and FMCAD. He was Symposiums Chair at ISMVL 1999 and 2014, and ETS 2018. He is the coordinator of the Graduate School "System Design" funded within the German Excellence Initiative and a co-founder of the Data Science Center at the University of Bremen. He received best paper awards at HVC in 2006, FDL in 2007 and 2010, DDECS in 2010 and ICCAD in 2013 and 2018. He received the Berninghausen Award for Excellence in Teaching in 2018. He is an Associate Editor of IEEE Transactions on Computer-Aided Design of Integrated Circuits and Systems, IEEE Transactions on Very Large Scale Integration Systems, IET Cyber-Physical Systems: Theory & Applications, International Journal on Multiple-Valued Logic and Soft Computing, and ACM Journal on Emerging Technologies in Computing Systems. His current research interests include the development and design of data structures and algorithms with a focus on circuit and system design. He is an IEEE Fellow.