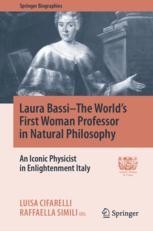 An Iconic Physicist in Enlightenment Italy

This book provides a fascinating insight into the life and scientific work of Laura Bassi, the first female member of the influential Academy of Sciences of the Institute of Bologna and also the first woman to be appointed a university professor in physics, or universal philosophy as it was then termed. The book describes Laura Bassi’s research activities and achievements, explaining the influence of Newton, her role in promoting Newtonian experimental physics in Bologna, and her work as an experimentalist, including on electricity. Much attention is paid to the context in which Bassi developed her career. The very considerable difficulties faced by a woman surrounded by male university teachers and members of the Academy are discussed, casting light on the constraints that led Bassi to set up the first experimental physics laboratory in her home, complete with the many instruments required for experimentation and private teaching. The aim is to provide a rounded and well-documented account of the scientific endeavors and achievements of a too often overlooked scientist who struggled to overcome the prejudices of her age.

Luisa Cifarelli was first INFN researcher in Bologna and fellow at CERN (Geneva). She started her university career in 1988, being appointed a Chair of Physics in 1991. She has been teaching in several Italian Universities (Naples, Pisa and Salerno) and is now a Professor of Experimental Physics in Bologna. Her research interests have always been in the domain of very high energy nuclear and subnuclear physics, in the framework of international collaboration experiments at major European laboratories such as CERN (Geneva) and DESY (Hamburg), and recently also in the domain of astroparticle physics at LNGS (Gran Sasso National Laboratory) in Italy. She has served in several councils, committees and commissions, among which the CERN Council and the INFN Board of Directors. President the Italian Physical Society since 2008, she has been President of the European Physical Society in 2011-2013. She is a Fellow of the Institute of Physics, a member of the Bologna Academy of Sciences and of the Academia Europaea, Chair of the Forum of International Physics and a member of the Committee on International Scientific Affairs of the American Physical Society. She is a member of the Scientific Committee of the "Ettore Majorana" Foundation and Centre for Scientific Culture (Erice) and of the Scientific Council of JINR (Dubna). She is President of the "Enrico Fermi" Historical Museum of Physics and Centre for Study and Research (Rome).

Raffaella Simili teaches History of Science at the University of Bologna. She is President Emeritus of the Italian Society of the History of Science, and coordinator of the Laura Bassi Forum of the Academy of Sciences of the Bologna Institute. She is a Life Member of Clare Hall (Cambridge, UK); member of the Académie Internationale des Sciences de Paris, and of the Academy of Sciences of Bologna. Her publications include: More than Pupils. Italian Women in Science at the Turn of the 20th Century (edited by V.P. Babini), Olschki, 2007; Sotto falso nome. Scienziate italiane ebree 1938-1945, Pendragon, 2010; Scienziati, patrioti, presidenti. L'Accademia Nazionale dei Lincei (1874-1926), edited by, Laterza, 2012; Umanisti e presidenti. L'Accademia Nazionale dei Lincei (1900-1933), Laterza, 2017.