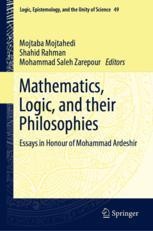 Mathematics, Logic, and their Philosophies

Essays in Honour of Mohammad Ardeshir

This volume is a collection of essays in honour of Professor Mohammad Ardeshir. It examines topics which, in one way or another, are connected to the various aspects of his multidisciplinary research interests. Based on this criterion, the book is divided into three general categories. The first category includes papers on non-classical logics, including intuitionistic logic, constructive logic, basic logic, and substructural logic. The second category is made up of papers discussing issues in the contemporary philosophy of mathematics and logic. The third category contains papers on Avicenna’s logic and philosophy.

Mohammad Ardeshir is a full professor of mathematical logic at the Department of Mathematical Sciences, Sharif University of Technology, Tehran, Iran, where he has taught generations of students for around a quarter century. Mohammad Ardeshir is known in the first place for his prominent works in basic logic and constructive mathematics. His areas of interest are however much broader and include topics in intuitionistic philosophy of mathematics and Arabic philosophy of logic and mathematics. In addition to numerous research articles in leading international journals, Ardeshir is the author of a highly praised Persian textbook in mathematical logic. Partly through his writings and translations, the school of mathematical intuitionism was introduced to the Iranian academic community.

Mojtaba Mojtahedi is Assistant Professor at the Department of Mathematics, Statistics and Computer Science, College of Science, University of Tehran. He is graduated from Sharif University of Technology in 2013. His research interests include provability logic, intuitionistic logic and arithmetic.
Shahid Rahman is full-professor of logic and epistemology at the Université de Lille-Nord-pas-de-Calais, Sciences Humaines et Sociales. He is also researcher at the UMR-CNRS 8163 : STL, member (2016-2018) of the Conseil Scientifique du Réseau national des Maisons des Sciences de l’Homme, member of the commission of the Institute Eric Weil, and director (for the French side) of the ANR-DFG Franco-German project  2012-2015 (Lille (MESHS)/Konstanz, Prof M. Armgardt): Théorie du Droit et Logique/Jurisprudenz und Logik. Prof. Rahman works span both philosophy of logic and its history, including a dialogical perspective on Constructive Type Theory. He is the leading researcher in the field of the dialogical conception of logic to which he contributed with publications in, among other fields, non-classical logics, legal reasoning, Aristotle, Arabic Logic and Epistemology. Prof. Rahman is the main editing director of two collections of books in Springer, namely, Logic, Epistemology and the Unity of Science (more than 40 volumes edited so far), and Logic, Argumentation and Reasoning, Perspectives from the Social Sciences and the Humanities.

Mohammad Saleh Zarepour is a Humboldt Postdoctoral Research Fellow at Ludwig Maximilian University of Munich. His areas of expertise include philosophy of mathematics, philosophy of language and philosophy of religion from the perspective of both contemporary analytic philosophy and medieval Islamicate philosophy. He has published articles in various journals, including Synthese, Archiv für Geschichte der Philosophie, Oriens, Acta Analytica, Religious Studies, Sophia, and Dialogue.