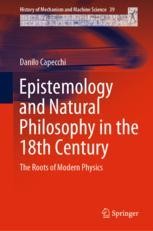 Epistemology and Natural Philosophy in the 18th Century

The Roots of Modern Physics

This book documents the process of transformation from natural philosophy, which was considered the most important of the sciences until the early modern era, into modern disciplines such as mathematics, physics, natural history, chemistry, medicine and engineering. It focuses on the 18th century, which has often been considered uninteresting for the history of science, representing the transition from the age of genius and the birth of modern science (the 17th century) to the age of prodigious development in the 19th century. Yet the 18th century, the century of Enlightenment, as will be demonstrated here, was in fact characterized by substantial ferment and novelty.

To make the text more accessible, little emphasis has been placed on the precise genesis of the various concepts and methods developed in scientific enterprises, except when doing so was necessary to make them clear. For the sake of simplicity, in several situations reference is made to the authors who are famous today, such as Newton, the Bernoullis, Euler, d’Alembert, Lagrange, Lambert, Volta et al. – not necessarily because they were the most creative and original minds, but mainly because their writings represent a synthesis of contemporary and past studies. The above names should, therefore, be considered more labels of a period than references to real historical characters.

Danilo Capecchi was professor of Structural Mechanics at University of Rome La Sapienza. His research into the history of science focuses mainly on classical mechanics.