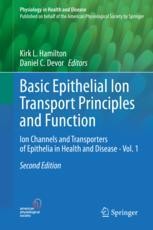 Ion Channels and Transporters of Epithelia in Health and Disease - Vol. 1

Kirk L. Hamilton was born in Baltimore, Maryland in 1953. He gained his undergraduate (biology/chemistry) and M.Sc. (ecology) degrees from the University of Texas at Arlington. He obtained his Ph.D. at Utah State University under the tutelage of Dr. James A. Gessaman, where he studied incubation physiology of Barn owls. His first post-doctoral position was at the University of Texas Medical Branch in Galveston, Texas under the mentorship of Dr. Douglas C. Eaton where he studied epithelial ion transport, specifically, the epithelial sodium channel (ENaC).  He then moved to the Department of Physiology at the University of Alabama, Birmingham for additional post-doctoral training under the supervision of the late Dr. Dale J. Benos where he further studied ENaC, and non-specific cation channels. He took his first academic post in the Department of Biology at Xavier University of Louisiana in New Orleans (1990-1994). He then joined the Department of Physiology at the University of Otago in 1994, and he is currently an Associate Professor. He has focused his research on the molecular physiology and trafficking of potassium channels (specifically KCa3.1). He has published more than 60 papers and book chapters. His research work has been funded by the NIH, American Heart Association, Cystic Fibrosis Foundation, and Lottery Health Board New Zealand. Dr. Devor and he have been collaborators since 1999. When he not working, he enjoys playing guitar (blues and jazz) and volleyball. Kirk is married to Judith Rodda, a recent Ph.D. graduate in spatial ecology. They have 2 children, Nathan (b. 1995) and Emma (b. 1998).

Daniel C. Devor was born in Vandercook Lake, Michigan in 1961. His education took him through Southampton College of Long Island University, where he studied Marine Biology, before entering SUNY Buffalo for his Ph.D., under the guidance of Dr. Michael E. Duffey. During this time, he studied the role of basolateral potassium channels in regulating transepithelial ion transport. He subsequently did his post-doctoral work at the University of Alabama, Birmingham, under the mentorship of Dr. Raymond A. Frizzell, where he studied both apical CFTR and basolateral KCa3.1 in intestinal and airway epithelia. He joined the University of Pittsburgh faculty in 1995 where he is currently a Professor of Cell Biology. During this time, he has continued to study the regulation, gating and trafficking of KCa3.1 as well as the related family member, KCa2.3, publishing more than 50 papers on these topics. These studies have been funded by the NIH, Cystic Fibrosis Foundation, American Heart Association and pharmaceutical industry. When not in the lab, he enjoys photography and growing exotic plants. Dan is married to Catherine Seluga, an elementary school teacher. They have 3 children, Caitlin (b. 1990), Emily (b. 1993) and Daniel (b. 1997).