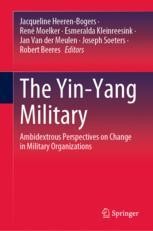 Jacqueline Heeren-Bogers is an assistant professor of Defense Accounting Control and Economics at the Faculty of Military Sciences of the Netherlands Defense Academy. Her research focuses on the impact of so-called hard controls that relate to formal instruments like rules and segregation of duties and so-called soft controls linked to the culture, ethical climate and leadership within the organization.

René Moelker is an associate professor of sociology at the Royal Military Academy, the Netherlands. He holds a doctorate from the Erasmus University, Rotterdam. His work in military sociology concentrates on the sociology of military families, military technology, military profession, the military sociology of Norbert Elias, military education, conflict in Chechnya, and the media. His latest project focuses on veterans and veteran care.

Esmeralda Kleinreesink is a lieutenant-colonel with the Royal Netherlands Air force. She is specialized in  international comparative research  in the field of military veterans, in particular research into military autobiographies.

Jan van der Meulen is a sociologist. His research and publications focus on civil-military relations. Until his retirement he was associate professor at the Netherlands Defense Academy and professor by special  appointment at Leiden University.

Joseph Soeters is a professor of organization studies at the School of Social and Behavioral Sciences, Tilburg University, the Netherlands. His work focuses on the interconnection of sociology and management on one side and military studies on the other side.

Robert Beeres is a professor of defense economics, Department of Military Management Studies at the Faculty of Military Sciences, the Netherlands Defense Academy.