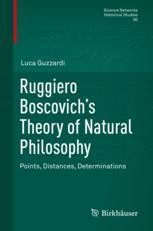 Drawing on published works, correspondence and manuscripts, this book offers the most comprehensive reconstruction of Boscovich’s theory within its historical context. It explains the genesis and theoretical as well as epistemological underpinnings in light of the Jesuit tradition to which Boscovich belonged, and contrasts his ideas with those of Newton, Leibniz, and their legacy. Finally, it debates crucial issues in early-modern physical science such as the concept of force, the particle-like structure of matter, the idea of material points and the notion of continuity, and shares novel insights on Boscovich’s alleged influence on later developments in physics.

With its attempt to reduce all natural forces to one single law, Boscovich’s Theory of Natural Philosophy, published in 1758, left a lasting impression on scientists and philosophers of every age regarding the fundamental unity of physical phenomena. The theory argues that every pair of material points is subject to one mutual force — and always the same force — which is their propensity to be mutually attracted or repelled, depending on their distance from one another. Furthermore, the action of this unique force is visualized through a famous diagram that fascinated generations of scientists. But his understanding of key terms of the theory — such as the notion of force involved and the very idea of a material point — is only ostensibly similar to our current conceptual framework. Indeed, it needs to be clarified within the plurality of contexts in which it has emerged rather than being considered in view of later developments.

The book is recommended for scholars and students interested in the ideas of the early modern period, especially historians and philosophers of science, mathematicians and physicists with an interest in the history of the discipline, and experts on Jesuit science and philosophy.

Luca Guzzardi is an Assistant Professor of Philosophy of Science at the University of Milan, Italy. His main interests are in the integrated history and philosophy of science.