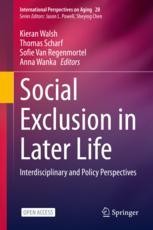 Drawing on interdisciplinary, cross-national perspectives, this open access book contributes to the development of a coherent scientific discourse on social exclusion of older people. The book considers five domains of exclusion (services; economic; social relations; civic and socio-cultural; and community and spatial domains), with three chapters dedicated to analysing different dimensions of each exclusion domain. The book also examines the interrelationships between different forms of exclusion, and how outcomes and processes of different kinds of exclusion can be related to one another. In doing so, major cross-cutting themes, such as rights and identity, inclusive service infrastructures, and displacement of marginalised older adult groups, are considered. Finally, in a series of chapters written by international policy stakeholders and policy researchers, the book analyses key policies relevant to social exclusion and older people, including debates linked to sustainable development, EU policy and social rights, welfare and pensions systems, and planning and development. The book’s approach helps to illuminate the comprehensive multidimensionality of social exclusion, and provides insight into the relative nature of disadvantage in later life. With 77 contributors working across 28 nations, the book presents a forward-looking research agenda for social exclusion amongst older people, and will be an important resource for students, researchers and policy stakeholders working on ageing.

Kieran Walsh is Professor of Ageing & Public Policy and Director of the Irish Centre for Social Gerontology, National University of Ireland Galway. Prior to taking up this role in 2018, he served as Project Director of Project Lifecourse within the Institute for Lifecourse and Society, a programme of work dedicated to capturing the lived experiences of children and youth, older people and people with disabilities in urban neighbourhoods. Kieran's research interests include: social exclusion in later life; the mediating role of public and social policy; place and life-course transitions; and informal and formal infrastructures of care. Kieran is Chair of the European COST Action CA15122 on ‘Reducing Old-Age Social Exclusion’, which comprises over 180 members from 41 different countries.

Thomas Scharf is Professor of Social Gerontology in the Population Health Sciences Institute and Co-Director of the Centre for Ageing & Inequalities at Newcastle University. He joined Newcastle in 2016, having previously been Director of the Irish Centre for Social Gerontology, NUI Galway. Tom is a Fellow of the UK Academy of Social Sciences and holds visiting professorships at NUI Galway and Keele University. He is President of the British Society of Gerontology (until 2022). Tom is Vice Chair of the European COST Action CA15122 on ‘Reducing Old-Age Social Exclusion’. Tom’s research addresses issues relating to social inclusion and exclusion in later life, often with a focus on the spaces and places in which inclusion and exclusion arise and on the policy responses to forms of exclusion. Sofie Van Regenmortel received her master’s degree in Adult Educational Sciences (Agogische Wetenschappen) from the Vrije Universiteit Brussel (VUB) in 2013. In October 2013 she started working at the Department of Adult Educational Sciences at the VUB, became a member of the Belgian Ageing Studies (BAS) research group and started her PhD research on social exclusion in later life, which she successfully completed in September 2017. Together with her supervisor, prof. dr. Liesbeth De Donder, she was part of the European project ‘WeDO2! For the well being and dignity of older people’ (2013-2015). In 2016 she joined the ROSEnet COST action on ’Reducing Old-Age Social Exclusion: Collaborations in Research and Policy’. Currently she is working for Statbel (Statistics Belgium) and remains involved in the BAS research as a voluntary research member.

Anna Wanka studied Sociology and Law at the University of Vienna, Austria. From 2009 to 2016 she worked as a researcher at the Research Group “Family / Generations / Life Course / Health and Ageing” at the Department of Sociology in Vienna, where she was involved in various third-party funded projects, completed several international research fellowships and international teaching appointments. She completed her PhD in the field of environmental gerontology in December 2016. Since 2017 she is a postdoc researcher at the research training group “Doing Transitions” at Goethe University Frankfurt am Main, Germany. Her main research areas lie in the field of environmental and social exclusion in later life, life course transitions, technology and ageing, as well as lifelong learning.