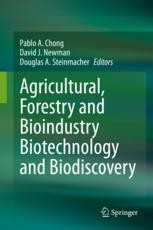 Food security, crop protection, biodiversity, and human and environmental health are among the main needs and concerns of society. Modern biotechnology and life sciences represent a constantly evolving area that is key for the rational use of natural resources – resources that in turn are indispensable for societal development. This book features the outcomes of the IV International Biotechnology and Biodiversity Congress, held in Guayaquil, Ecuador, 2018. It includes extensive reviews of the trends in agricultural and forestry biotechnology, molecules and materials biodiscovery, ethnomedicine, environmental impact and bioindustry research, describing many of these topics from the Latin America perspective and showing how the biodiversity and ancient knowledge of these countries are vital for worldwide sustainable development.

Pablo Chong has a Master’s degree in Biotechnology from Escuela Superior Politécnica del Litoral (EPSOL), Ecuador and a PhD degree in Biotechnology from Wageningen University, the Netherlands. He has eighteen years’ experience in the field of biotechnology, molecular biology and microbiology. His research focuses on fungi molecular mechanisms to resist systemic fungicides, and his work has led to publications on the discovery of a new resistance mechanism in Pseudocercospora fijiensis. Since 2016, he has worked as an invited Biology Professor at the Life Science Faculty at ESPOL University, and Head Research Coordinator of the molecular biology and plant tissue culture departments at CIBE-ESPOL.

David Newman has an analytical chemistry (ARIC) background. He holds an MSc in Synthetic Organic Chemistry and a doctorate in Microbial Chemistry. His career spans over 50 years: he spent 25 years working on the search for novel antibiotics (both antibacterial and antifungal) in the US pharmaceutical industry. The other 25 years were spent working at the US National Cancer Institute, where he was initially responsible for microbial and marine collection programs looking for leads to antitumor drugs. During this time, he was also responsible for the sourcing of pure halichondrin B, an agent from a deep-water sponge, and he received the NIH Award of Merit for his research leading to the successful introduction of Halaven®.

Douglas André Steinmacher, PhD, has twenty years’ experience in the field of plant tissue culture, especially somatic embryogenesis. He is an agronomist (2002) with an MSc in Plant Genetic Resources from the Federal University of Santa Catarina (UFSC – 2005) and a PhD in Applied Botany from the University of Hamburg, Germany (2010). He was a member of the board of directors of the Germany Society for Plant Tissue Culture (ADIVK) (2009-2010), and since 2014 has been head of the Vivetech Agrosciences company. His interests include plant micropropagation, somatic embryogenesis, plant bioreactors, temporary immersion systems, plant somaclonal variation and plant physiology.
Show all