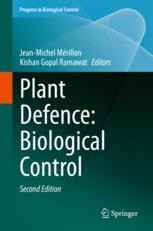 Insects, pests and weeds are responsible for substantial loss of crops and reduced food supplies, poorer quality of agricultural products, economic hardship for growers and processor. Generally, chemical control methods are neither always economical nor are they effective and may have associated unwanted health, safety and environmental risks. Biological control involves use of beneficial biological agents to control pests and offers an environmental friendly approach to the effective management of plant diseases and weeds. The chapters are written by well recognized group leaders in the field. This book provides a comprehensive account of interaction of host and pests, and development of biological control agents for practical applications in crops management utilizing inherent defence mechanism, induced stimulation and biological control agents. The contents are divided into the following sections: General biology of plant defence, Use of natural compounds for biological control, Use of biological agents, Mechanism of action and Commercial aspects. The book will be useful for academicians, researcher and industries involved in study and manufacturing these products.

Prof. Dr. Jean-Michel Mérillon received his M.Pharma. (1979) and Ph.D. (1984) from the University of Tours, France. He joined the university of Tours as assistant professor in 1981, became associate professor in 1987. In 1993 he moved to the faculty of Pharmacy, University of Bordeaux, France, accepting a position as full professor. He has been the director of the research group on biologically active plant substances for over 15 years, at the Institute of Vine and Wine Sciences (University of Bordeaux, France), which comprises 25 scientists and research students. The group has been working on phenolic compounds from vine and wine for many years, mainly complex stilbenes and their involvement in health. He is involved in developing teaching on plant biology, natural bioactive compounds and biotechnology. Prof. Mérillon has published more than 180 research papers in internationally recognized journals resulting in an H index of 49, and has coedited books and reference works on secondary metabolites and biotechnology.

Throughout his career, Prof. Mérillon has traveled widely as a senior professor. Scientists from several countries have been and are working in his laboratory, and his research is supported by funding from the Aquitaine Regional Government, the Ministry of Higher Education and Research, and various private companies. In 2004, he founded the technology transfer unit “Polyphenols Biotech”, providing support for R&D programs for SMEs and major groups from the cosmetic, pharmaceutical, agricultural and health-nutrition sectors. He is currently the manager of this unit.

Prof.Dr. Kishan G. Ramawat is Former Professor& Head of the Botany Department, M.L. Sukhadia University, Udaipur, India, and can look back on longstanding research experience. He received his Ph.D. in Plant Biotechnology in 1978 from the University of Jodhpur, India and afterwards joined the university as a faculty member. In 1991 he moved to the M.L.Sukhadia University in Udaipur as Associate Professorand became Professor in 2001. He served as the Head of the Department of Botany (2001-2004, 2010-2012), was in charge of the Department of Biotechnology (2003-2004), and was a member of the task force on medicinal and aromatic plants of the Department of Biotechnology, Government of India, New Delhi (2002-2005) and coordinated UGC-DRS and DST-FIST programmes (2002-2012).

Prof. Ramawat has published more than 170 well cited peer reviewed papers and articles, and edited several books and reference works on topics such as the biotechnology of medicinal plants, secondary metabolites, bioactive molecules, herbal drugs, and many other topics. In his research group, Prof. Ramawat has supervised doctoral thesis of 25 students. He is an active member of several academic bodies, associations and editorial boards of journals.​
Show all