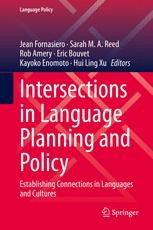 Establishing Connections in Languages and Cultures

This volume encompasses the range of issues encountered by language scholars who teach and research in departments of languages and cultures within the higher education system, predominantly in Australia, but touching other universities worldwide. Related studies on language planning, methodology or pedagogy have focused on one or more of these same issues, but rarely on their totality.  Intersections as a metaphor running discreetly through the essays in this volume, connects them all to a lived reality. The field of languages and cultures, as it is practised and reflected upon in Australian universities, is essentially an interdisciplinary and interconnecting space - one in which linguistic and disciplinary diversities meet and join forces, rather than collide or disperse along different pathways. The international and local studies featured here focus on language planning, new pedagogies and language reclamation and link to meeting points and commonalities. They show that language scholars are increasingly finding themselves on common ground as they tackle issues of policy and practice affecting their field, whether within their institutions, within the tertiary system, or within the framework of government policy.

Jean Fornasiero is Professor Emerita of French Studies at the University of Adelaide, a Fellow of the Australian Academy of the Humanities and is currently the President of the Languages and Cultures Network for Australian Universities (LCNAU). She has co-authored award-winning books in French-Australian maritime history. While her research is anchored primarily in French history and culture of the nineteenth century, she has also published translations and edited several collections of essays in contemporary languages fields.

Sarah M.A. Reed holds a PhD in French and Translation from the University of Adelaide, where she is currently a Visiting Research Fellow. She is the author of Translating Cultural Identity: French Translations of Australian Crime Fiction, published by Peter Lang in 2019, and her main research interest lies in the textual and paratextual representations of cultural identity when translated for a new readership. She is the immediate past Secretary of the Languages and Cultures Network for Australian Universities Inc.

Rob Amery is the Head of the Department of Linguistics at the University of Adelaide, and his research publications are principally devoted to indigenous language reclamation. He has worked closely with Kaurna people, developing teaching programs, producing language resources and implementing strategies to re-introduce the sleeping Kaurna language. In  1994, he developed an innovative national curriculum framework for the introduction of accredited Indigenous language programs, including Kaurna, at senior secondary level.

Eric Bouvet holds holds a PhD in French Studies from the University of Melbourne and is an Associate Professor in Language, Literature and Culture at Flinders University. He is also Dean of Education in the College of Humanities, Creative Arts and Social Sciences, and Convener of the Bachelor of Languages. Eric teaches French language, culture and literature, as well as applied linguistics. His research interests include language learning strategies, experiential language learning and the history of the French presence in Australia.

Kayoko Enomoto is a Senior Lecturer in Japanese and Head of the Department of Asian Studies at the University of Adelaide, as well as the Director of Student Experience in the Faculty of Arts. Her research interests lie in higher education research, languages education and innovative teaching practice. She has won various excellence in teaching awards, including a national Office of Learning and Teaching Citation Award and the University of Adelaide’s Stephen Cole the Elder Award.

Hui Ling Xu is a Senior Lecturer in Chinese Studies at Macquarie University, specializing  in languages education, applied linguistics and Chinese linguistics. She has extensive experience in teaching Chinese as a Foreign Language (CFL), for which she has received two Learning and Teaching awards. She co-edited Exploring innovative pedagogy in the teaching and learning of Chinese as a foreign language (Springer), and co-authored Teaching and Learning Chinese in Schools—Case Studies in Quality Language Education (Palgrave).