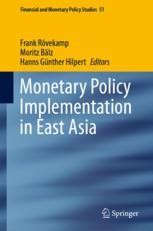 This book shares essential insights into the implementation of monetary policy in various East Asian countries. Highlighting case studies from China, Taiwan, Korea, Japan and Singapore, leading economists and practitioners from central banks illustrate how dependent effective monetary policy is on the institutional and financial market environment, as well as on successful implementation and communication. The respective contributions cover various aspects of monetary policy implementation, such as: How is inflation targeting handled? For what purposes and how do central banks operate on financial markets, and what are the (at times unintended) effects? How do currency market interventions help achieve the monetary policy targets set by individual countries or areas? In addition, Asian experiences are contrasted with those from the Eurozone.

Prof. Frank Rövekamp is a Professor of Asian Studies with a focus on Japan, and Director of the East Asia Institute at Ludwigshafen University of Applied Sciences, Germany. He obtained his Ph.D. in Business Studies from the University of Cologne, Germany, prior to working for over 15 years in the industry and holding senior management positions in Germany, Japan and Hong Kong. His current research interests include international monetary, currency and trade policy.

Prof. Moritz Bälz LL.M. (Harvard) is a Professor of Japanese Law and its Cultural Foundations at the Faculty of Law, Goethe University of Frankfurt, Germany, where he currently also serves as Deputy Director of the Interdisciplinary Centre for East Asian Studies (IZO). Prior to assuming his current position in 2008, he worked for several years as an attorney with the international law firm Freshfields Bruckhaus Deringer in New York and Frankfurt. His research chiefly focuses on Japanese business law from a comparative perspective, and on dispute resolution in Japan.

Dr. Hanns Günther Hilpert is Head of the Asia Division at the German Institute for International and Security Affairs (Stiftung Wissenschaft und Politik (SWP)), Berlin. Having previously worked for the German Institute for Japanese Studies (DIJ), Tokyo, and the Ifo Institute for Economic Research, Munich, he has published numerous books and articles on the Japanese economy and on Asian trade and economic integration. His current research focuses on various policy-oriented economic issues in East Asia.