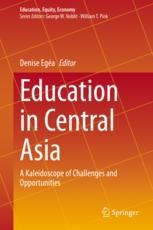 A Kaleidoscope of Challenges and Opportunities

This book brings together internationally prominent scholars renowned for their work on post-Soviet republics, as well as outstanding emerging scholars native of Central Asia in order to discuss the state of education in the Central Asian Republics of Kazakhstan, Kyrgyzstan, Tajikistan, Turkmenistan, and Uzbekistan. Drawing on their individual contexts and research, the authors offer analyses and critiques of some of the social, political, and economic issues in education in their respective countries, and some insights about how local actions engage with the challenges and problems, as well as with the possibilities and opportunities they face.

Since gaining their independence in 1991, the five republics of Central Asia have been undergoing some enormous political, social, linguistic, cultural, and economic changes, even as we write. This collection shows that researchers are increasingly interested in exploring the development of education in this part of the world. In these countries, education plays a significant role in transitioning from centrally planned to market economies and is seen as the key resource to facilitate entry into the global competitiveness sphere.

This book will be of particular interest to educators, researchers, and policy makers engaged in research or with a particular interest in curricula, and education systems and reforms, and to undergraduate and graduate students studying and researching education in Central Asia or in other post-Soviet contexts.

Denise Egéa is Professor Emeritus and former Director of the French Education Center for Research, Louisiana State University, USA. She holds the position of Professor, Graduate School of Education, Nazarbayev University, Kazakhstan. She is a Fellow in the Philosophy of Education Society, a Phi Kappa Phi Scholar, and an Officier dans l’Ordre des Palmes Académiques. Her main research interests include Ethico-political issues in education; diversity and equity; languages, cultures, intercultural communication; and human, cultural, and linguistic rights. She has over 100 publications, including two main books: Derrida & Education and Levinas and Education.