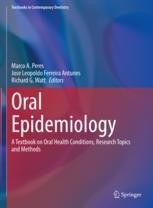 A Textbook on Oral Health Conditions, Research Topics and Methods

This intermediate textbook on oral epidemiology is designed to meet the needs of advanced students in the fields of Dentistry and Oral Health and dentists in the early stages of their career. Readers will find detailed information on the epidemiology of individual diseases and disorders and on hot topics and methods in oral health research. The extensive first part of the book explores the international epidemiological literature regarding a wide range of conditions, from dental caries and periodontal diseases to halitosis and malocclusions. In each case, the prevalence, disease-specific measures, and associated factors are identified. Attention is then focused on cutting-edge research topics in oral epidemiology, such as the intriguing mechanisms linking oral diseases and chronic general diseases, life course epidemiology, and the role of socioeconomic determinants of oral health. The final part of the book is devoted to description of the epidemiological methods and tools applied in the field of oral health. Here, the coverage includes validation of questionnaires, data collection and data analyses, and systematic reviews and meta-analyses.

Marco is an internationally recognised researcher in the field of Population Oral Health and Oral Epidemiology, he has been cited in a paper published in 2016 in Community Dentistry and Oral Epidemiology (doi: 10.1111/cdoe.12249) as the seventh most productive researcher in Public Health Dentistry in the world in the last half-century. Marco was the recipient of the 2017 International Association for Dental Research (IADR) Distinguished Scientist Award for Global Oral Health Research. Currently Marco is the Vice-president of the IADR Global Oral Health Inequalities Research Network (GOHIRN).

Jose Leopoldo Ferreira Antunes is Professor of Epidemiology and Head of the Department of Epidemiology at the School of Public Health, University of São Paulo (USP), Brazil. Dr. Antunes was awarded his Bachelor’s degree in Social Sciences from USP in 1984 and went on to gain an MSc and a PhD in Sociology at the university before completing a postdoctorate in Dentistry (2005). He has acted as a researcher of the National Council for Scientific and Technological Development since 2001 and became a Full Professor in 2010. In 2003 he was named an Eminent Scientist of the Year (Brazil, South America), a World Scientist Forum International Award of the International Research Promotion Council. Dr. Antunes is Editor in Chief of Revista de Saude Publica and an Associate Editor of Oral Diseases. He is the author of almost 200 publications, including many in leading journals in the field.

Richard G. Watt is Professor and Honorary Consultant in Dental Public Health, Department of Epidemiology and Public Health, University College London (UCL), UK. He is Director of Research, Development & Innovation and an Honorary Consultant in Dental Public Health for the Central North West London NHS Foundation Trust. His previous posts include Head of Department, Research Department of Epidemiology and Public Health, UCL. In 2014 he received a Distinguished Scientist Award for Behavioural, Epidemiologic and Health Services Research from the International Association for Dental Research, and in 2016 an NIHR Senior Investigator Award.  He has received numerous research grants and fulfiled a variety of leadership roles on research and advisory committees and groups. He is the author of 238 publications in total.