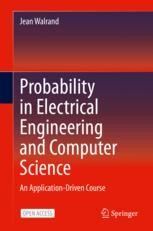 This revised textbook motivates and illustrates the techniques of applied probability by applications in electrical engineering and computer science (EECS). The author presents information processing and communication systems that use algorithms based on probabilistic models and techniques, including web searches, digital links, speech recognition, GPS, route planning, recommendation systems, classification, and estimation. He then explains how these applications work and, along the way, provides the readers with the understanding of the key concepts and methods of applied probability. Python labs enable the readers to experiment and consolidate their understanding. The book includes homework, solutions, and Jupyter notebooks. This edition includes new topics such as Boosting, Multi-armed bandits, statistical tests, social networks, queuing networks, and neural networks. For ancillaries related to this book, including examples of Python demos and also Python labs used in Berkeley, please email Mary James at mary.james@springer.com.

Jean Camille Walrand is a professor emeritus of Electrical Engineering and Computer Science at UC Berkeley. He received his Ph.D. from the Department of Electrical Engineering and Computer Sciences department at the University of California, Berkeley, and has been on the faculty of that department since 1982. He is the author of "An Introduction to Queueing Networks" (Prentice Hall, 1988), "Communication Networks: A First Course" (2nd ed. McGraw-Hill,1998), and “Uncertainty: A User Guide” (Amazon, 2019) and co-author of "High-Performance Communication Networks" (2nd ed, Morgan Kaufmann, 2000), "Communication Networks: A Concise Introduction" (2nd ed, Morgan & Claypool, 2017),  "Scheduling and Congestion Control for Communication and Processing networks" (Morgan & Claypool, 2010), and “Sharing Network Resources” (Morgan & Claypool, 2014). His research interests include stochastic processes, queuing theory, communication networks, game theory, and the economics of the Internet. Walrand has received numerous awards for his work over the years. He is a Fellow of the Belgian American Education Foundation and of the IEEE. Additionally, he is a recipient of the Lanchester Prize, the Stephen O. Rice Prize., the IEEE Kobayashi Award, and the ACM SIGMETRICS Achievement Award.