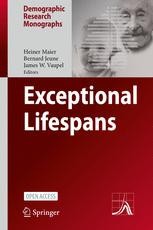 How long can humans live? This open access book documents, verifies and brings to life the advance of the frontier of human survival. It carefully validates data on supercentenarians, aged 110+, and semi-supercentenarians, aged 105-109, stored in the International Database on Longevity (IDL). The chapters in this book contribute substantial advances in rigorously checked facts about exceptional lifespans and in the application of state-of-the-art analytical strategies to understand trends and patterns in these rare lifespans. The book includes detailed accounts of extreme long-livers and how their long lifespans were documented, as well as reports on the causes of death at the oldest ages. Its key finding, based on the analysis of 1,219 validated supercentenarians, is that the annual probability of death is constant at 50% after age 110. In contrast to previous assertions about a ceiling on the human lifespan, evidence presented in this book suggests that lifespan records in specific countries and globally will be broken again and again as more people survive to become supercentenarians. ​

Heiner Maier is research scientist with the Max Planck Institute for Demographic Research (MPIDR) and Dean of the MPIDR’s research training program International Max Planck Research School for Population, Health and Data Science (IMPRS-PHDS). He studied psychology at Free University of Berlin and human development and family studies at Pennsylvania State University, and received his doctoral degree at the latter university in 1995, for a dissertation on interrelationships and correlates of health behaviors in adults. He was post-doctoral fellow with the Berlin Aging Study at the Max Planck Institute for Human Development before he joined the MPIDR in 1998. His interest in supercentenarian research was captivated by a workshop held at the MPIDR in 2000. Subsequently he joined Vaupel’s international group of supercentenarian researchers, organized the supercentenarian data collection in Germany, helped to develop the International Database on Longevity (IDL), and coordinated the publication of the group’s 2010 monograph and the corresponding IDL website. He has more than 15 years of experience in the administration of international doctoral programs in demography. He was Dean of the International Max Planck Research School for Demography (2002-2012) and Founding Dean of the European Doctoral School of Demography (2005-2007).

Bernard Jeune is a senior researcher emeritus in epidemiology at the Institute of Public Health at the University of Southern Denmark (USD). He graduated in medicine from Aarhus University in 1971 and has been resident at different hospital in Denmark in the 1970s. He has been the head of the Institute of Public Health, the head of the Ageing Research Centre, and head of the Graduate Program in Public Health at USD. His research work has concerned the epidemiology of chronic diseases and disability, in the latest years with emphasis on the oldest-old. He is member of the advisory board of the Danish Ageing Research Centre, member of the scientific advisory board of Gerontology Research Center (GEREC) in Finland, and member of the advisory board of the International Dabase on Longevity, Montpellier (France). He is one of the principal investigators of the Five Country Oldest Old Project (5-COOP). He has published more than 300 publications, has given almost 400 lectures, has supervised about 25 Ph.D-theses, and has evaluated more than 50 Ph.D-theses.

Professor James W. Vaupel is AXA Professor of Longevity Research and Director of the Interdisciplinary Centre on Population Dynamics at the University of Southern Denmark.  The Max Planck Institute for Demographic Research was founded under his leadership in 1996 and he served as Director until the end of 2017. He was Director of the Max-Planck Odense Center on the Biodemography of Aging from 2013 through 2017. He also serves as Research Professor at Duke University’s Population Research Institute. Educated at Harvard College, Harvard Business School and the Kennedy School of Government at Harvard, Dr. Vaupel is a scientific member of the U.S. National Academy of Sciences, the American Academy of Arts and Sciences, the German National Academy of Sciences Leopoldina and the Max Planck Society. He was awarded both of the two highest honors of the Population Association of America, the Taeuber prize (for innovation in biodemography) and the Sheps prize (for developing the mathematics of heterogeneous populations). For his research on longevity he won the IPSEN Foundation award as well as the Seneca Medal and was granted an honorary doctorate by the University of Newcastle.  He was granted an honorary doctorate in economics from Lund University. In 2011 he was awarded the Latsis Prize (researcher of the year) by the European Science Foundation for his contributions to population research. His scholarly publications have been cited (Google Scholar 11 Sept. 2018) more than 35 thousand times, with 300 articles cited at least 10 times and 91 articles cited at least 91 times.