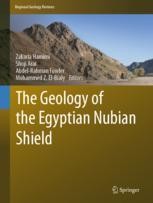 The Geology of the Egyptian Nubian Shield

This richly illustrated book provides an overview of the Neoproterozoic Pan-African Belt of Egypt (PABE), which represents the northwestern continuation of the Arabian-Nubian Shield (ANS) and the East African Orogen (EAO). The first chapter offers an introduction to the Turin Papyrus Map and the historical background of the PABE, while the second addresses how the PABE is related to the ANS and EAO. Rock succession of the PABE is dealt with in Chapter 3, while Chapter 4 focuses on Sinai Metamorphic Core Complexes and implications on the break-up of Rodinia.
Subsequent chapters discuss a broad range of topics, e.g. ophiolite-dominated suprastructural rocks; volcanosedimentary succession, Neoproterozoic volcanism and volcanic rocks in Egypt; enigmatic issues concerning granite, Dokhan and Hammamat sediments; the lithospheric mantle beneath the Northeast African continent and the mantle section of Neoproterozoic ophiolites from the PABE; sutures, megashears and petrogenetic evolution of the Neoproterozoic rocks of Egypt; and metallic and non-metallic mineral deposits in the PABE, which are covered in extensive detail.
The book’s closing chapters discuss the application of remote sensing techniques and anisotropy of magnetic susceptibility (AMS) to decipher the tectonic evolution of the PABE, as well as the use of geophysical data to map structural features and hydrothermal alteration zones in the PABE.

Zakaria Hamimi (Benha University, Egypt)
Zakaria Hamimi is a structural geologist who spent majority of his academic career at Benha University (Egypt) along with some years at Sana’a University (Yemen) and King Abdulaziz University (Saudi Arabia). He has graduated (1984) from Assiut University (distinction with honour degree) and holds the M.Sc. (1988) from Zagazig University (Egypt) and the Ph.D. in Structural Geology and Tectonics (1992) from Cairo University. His research interests focus on structural geology, microstructures and tectonics. He has worked in many field-related sub-disciplines of Earth Sciences including geologic mapping, microstructural analysis, strain analysis, paleostress reconstruction, active tectonics, tectonic geomorphology, crustal deformation and image processing. He used all these fields to study key areas in the Arabian-Nubian Shield and to decipher their deformation history. Zakaria Hamimi is the President and one of the founding teams, of the Arabian Geosciences Union since 2012.  He has received the medal of the Egyptian Geological Society of Egypt in 2015 and also the medal of the Arab Mining and Petroleum Association in 2016. He has co-published 50 research articles in national and international indexed and refereed journals and authored several books. In 2016, Zakaria Hamimi (1) joined the AJGS as Associate Editor responsible for evaluating submissions in the fields of Structural Geology, Microstructures and Tectonics, (2) selected as a Member of the Egyptian Universities Promotion Committee, the Supreme Council for Universities (SCU, Egypt), (3) nominated as a Secretary of the National Committee for Geological Sciences, Academy of Scientific Research and Technology and (4) designated as the IUGS-Representative for Egypt. November 2017, he attended the Gondwana 16 International Conference held at Bangkok, Thailand, as the Representative of the National Committee for Geological Sciences, Academy of Scientific Research and Technology, Egypt.

Shoji Arai (Kanazawa University)
After obtaining Ph.D. at the University of Tokyo in 1975, he was on the Faculty at the University of Tokyo, Shizuoka University and University of Tsukuba, Japan. He has been a Professor at Kanazawa University, Japan, since 1989. Throughout his academic career, he has been working on mantle-derived rocks and minerals to unravel processes and constitutions of the mantle, and published more than 300 papers. Ophiolites, peridotite xenoliths and the current seafloor are his main research targets due to easy accessibility to the deep-seated rocks through them. He is therefore highly interested in the Mohole, our dream, where we can observe in-situ mantle.

Thomas James (Abdel-Rahman) Fowler (United Arab Emirates University)
Thomas James (Abdel-Rahman) Fowler completed a Bachelor of Science majoring in Geology at Sydney University, Australia, with first-class honours in Mineralogy, graduating in 1976. He completed a Ph.D. degree at the University of New South Wales, Australia, in 1988. The topic of the Ph.D. was Tectonics and Structural Geology of part of the Lachlan Fold Belt of NSW. He has taught Structural Geology and Tectonics at the University of New South Wales and at La Trobe University, Victoria, Australia, and at the United Arab Emirates University since 1999. Prior to his doctoral studies, he was employed in the uranium and tin mining industries as an exploration geologist in the Northern Territory, Queensland, and New South Wales. He has worked as a geological consultant in gold exploration. He has conducted research projects in Australia, Turkey, Egypt, Oman and the Emirates. His main research interests are in tectonics of the Arabian-Nubian Shield, obduction of the Semail Ophiolite, granite intrusion mechanisms and strain analysis.

Mohammed Z. El-Bialy
Mohammed Z. El-Bialy is a Professor of geochemistry and igneous petrology in the Geology Department at Port Said University, Egypt, where he has been since August 2008. From December 2011, he has held the position of Chairman of the Geology Department. Earlier, from 1992 to 2008, he progressed in his scientific carrier from research and teaching assistant (i.e. demonstrator) to faculty member in the Geology Department at Suez Canal University, Egypt. During the October 2007–July 2008 period, he joined the Department of Geology, Portland State University, Oregon, USA, as an Adjunct Professor. He received his B.Sc. (1991) in Geology, and M.Sc. (1999) and Ph.D. (2004) in Igneous Petrology and Geochemistry from Suez Canal University, Egypt. His research interests lie in the areas of geochemistry of rocks and minerals and petrogenesis of igneous rocks. The vast majority of his research works are focused on the tectonomagmatic evolution of the Neoproterozoic rocks of Arabian-Nubian Shield.