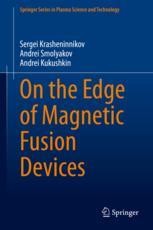 On the Edge of Magnetic Fusion Devices

This book reviews the current state of understanding concerning edge plasma, which bridges hot fusion plasma, with a temperature of roughly one million degrees Kelvin with plasma-facing materials, which have melting points of only a few thousand degrees Kelvin. In a fact, edge plasma is one of the keys to solution for harnessing fusion energy in magnetic fusion devices.

The physics governing the processes at work in the edge plasma involves classical and anomalous transport of multispecies plasma, neutral gas dynamics, atomic physics effects, radiation transport, plasma-material interactions, and even the transport of plasma species within the plasma-facing materials.

The book starts with simple physical models, then moves on to rigorous theoretical considerations and state-of-the-art simulation tools that are capable of capturing the most important features of the edge plasma phenomena. The authors compare the conclusions arising from the theoretical and computational analysis with the available experimental data. They also discuss the remaining gaps in their models and make projections for phenomena related to edge plasma in magnetic fusion reactors.

Sergei Krasheninnikov is a professor at the Mechanical Engineering Department, University California San Diego, USA. He is graduated from the Moscow Institute of Physics and Technical, known informally as PhysTech (Физтех). He was working at the Kurchatov Institute of Atomic Energy, Moscow, Russia and Plasma Science and Fusion Center at MIT, Cambridge, USA, and was involved in INTOR and ITER projects. His scientific interests span through different topics of plasma and atomic physics in fusion devices, plasma-material and laser-plasma interactions.

Andrei Smolyakov is a professor in the Department of Physics and Engineering Physics, University of Saskatchewan, Saskatoon Saskatchewan, Canada. He graduated from the Moscow Institute of Physics and Technology, known informally as PhysTech (Физтех) and worked at the Kurchatov Institute of Atomic Energy, Moscow Russia. His scientific interests include waves, instabilities, and nonlinear processes in magnetically confined fusion plasmas, material processing, and electric propulsion applications.

Dr. Andrei Kukushkin is a leading scientist at NRC Kurchatov Institute and NRNU MEPhI, Moscow, Russia. He graduated from Moscow State University. Being an employee of Kurchatov Institute, he was strongly involved in the INTOR project and then spent over 20 years at ITER developing the technology of the edge plasma modeling and applying it to providing the information on expected divertor performance for the designers. His scientific interests are concentrated on numerical modeling, mostly, of the edge and divertor plasma.
Show all