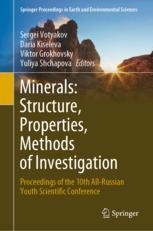 This book is devoted to the most relevant issues in crystal chemistry and mineral typomorphism; the structure, physico-chemical and technological properties of minerals; and the computational modeling of mineral structure and properties. Considerable attention is paid to the latest advances in and applications of physical methods of investigation for mineral structure and composition, in particular, X-Ray diffraction, spectroscopic (optical, vibrational, ESR, Moessbauer, etc.) and microscopic (SEM, TEM, AFM, etc.) studies, as well as chemical and isotopic analysis methods. The current research trends in space and planetary mineralogy (meteorites, regolites, tektites) are also discussed.

Though specifically intended for the specialist earth and planetary science readership, the book will be of interest to a broad range of scientists. It gathers the proceedings of the Tenth All-Russian Youth Scientific Conference “Minerals: structure, properties, methods of investigation.” Jointly organized by the Institute of Geology and Geochemistry, the Institute of Mineralogy (Urals Branch of the Russian Academy of Sciences) and Ural Federal University, the event was held in Ekaterinburg, Russia, on May 27–June 1, 2019.
Show all
About the authors

Prof. Sergei L. Votyakov is an Academician of the Russian Academy of Sciences, Doctor of Geological and Mineralogical Sciences, Principal Research Fellow at the Zavaritsky Institute of Geology and Geochemistry and Head of the Geoanalytic Center for Collective Use, Urals Branch of the Russian Academy of Sciences, Ekaterinburg. He is one of the leading Russian experts in the field of mineral physics and materials science of natural substances. S. Votyakov has published more than 500 works, including 8 monographs. His works have made a significant contribution to the formation and development of Mineral Physics – a new direction in the Earth sciences – and to the solution of the fundamental mineralogical problem, as well as the analysis of the phenomenon of defect formation at micro- and nanoscale levels in minerals,forming a basis for the reconstruction of the conditions of crystallisation and evolution in particulargeological (bioecological) situations. Prof.Votyakov has managed 15 national research projects aimed at studying the spectroscopy of minerals and holds 4 patents. He is the Chairman of the Russian Mineralogical Society’s commission for mineral spectroscopy and Editor-in-Chief of the journal Lithosphere.

Dr. Daria V. Kiseleva, Ph.D. in Geological and Mineralogical Sciences, is a Senior Research Fellow at the Zavaritsky Institute of Geology and Geochemistry, Ural Branch of the Russian Academy of Sciences, Ekaterinburg. A specialist in inductively-coupled plasma mass spectrometry, her scientific interests include physical and chemical analysis methods for mineral and biomineral substances, spectroscopy, biogenic hydroxylapatite, teeth and bones of fossil and modern vertebrates including humans, mineralogical stomatology, archaeometry, as well asstrontium and lead isotopes. She has published more than 80 articles in leading Russian and international scientific journals,as well as two monographs. She holds three patents.

Dr. Yuliya V. Shchapova, Ph.D. in Physical and Mathematical Sciences, is a Leading Research Fellow at the Zavaritsky Institute of Geology and Geochemistry, Ural Branch of the Russian Academy of Sciences, Ekaterinburg. She heads the Laboratory of Physical and Chemical Methods of Investigation. Dr. Shchapova has published over 150 research works in leading Russian and international scientific journals. Her scientific interests include crystal chemistry, physics and spectroscopy of minerals, structural disorder and radiation phenomena in minerals.

Victor I. Grokhovsky, Ph.D. in Technical Sciences, is a Professor at the Institute of Physics and Technology, Ural Federal University (Ekaterinburg), and Head of the UrFUMeteoritical expeditions and Extra Terra Consortium Laboratory (Ural Federal University). He has published over 400 research works in leading Russian and international scientific journals, focusing on the fields of meteoritics and planetary science (meteorites, lunar soil and dust). Prof. Grokhovsky is a member of the Meteoritical Society and of the Russian Academy of Sciences’Committee on Meteorites.