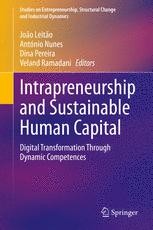 This book elaborates on the combined challenges regarding intrapreneurship, sustainability of human resources management (HRM) and digital transformation faced by today’s organizations. Representing the first such attempt in current management literature, it explores the sustainable HRM approach, which focuses on connecting internal and external factors so as to achieve positive outcomes not only for the respective organization but also for the society, economy, and environment. It also discusses cases related to HRM’s role in establishing a corporate sustainability culture, while also working to promote employee engagement, satisfaction, performance and well-being. In closing, the book discusses the new opportunities provided by digitalization and connectivity in the field of intellectual capital, which make employees the central focus of the organization in order to create sustainable competitive advantages.

João Leitão holds a Habilitation in Technological Change and Entrepreneurship, University of Lisbon, Instituto Superior Técnico, and a Ph.D. in Economics, University of Beira Interior (Portugal). Since 1999, he is an Assistant Professor (tenured) in Economics and Entrepreneurship. He is a research fellow of the NECE – Research Center in Business Sciences, associate researcher of the CEG-IST & ICS, University of Lisbon (Portugal), and external research fellow of the Instituto Multidisciplinar de Empresa, University of Salamanca (Spain). His research work has been published in several leading scientific journals. He is member of distinguished editorial and reviewer boards of indexed international journals. He is editor of the Springer Book Series: 'Studies in Entrepreneurship, Structural Change and Industrial Dynamics.

Veland Ramadani is Professor of Entrepreneurship and Family Business at Faculty of Business and Economics, South-East European University, North Macedonia. His research interests include entrepreneurship, small business management and family businesses. He authored or co-authored around 120 research articles, 10 textbooks and 14 edited books. He has published in Journal of Business Research, International Entrepreneurship and Management Journal, International Journal of Entrepreneurial Behavior & Research, Technological Forecasting and Social Change, among others. Dr. Ramadani has recently published the co-edited book Organizational Mindset of Entrepreneurship (Springer). Dr. Ramadani is co-Editor-in-Chief of Journal of Enterprising Communities (JEC). He has received the Award for Excellence 2016 – Outstanding Paper by Emerald Group Publishing. In addition, Dr. Ramadani was invited as a keynote speaker in several international conferences and as a guest lecturer by President University, Indonesia and Telkom University, Indonesia. In 2017, he was appointed as a member of Supervisory Board of Development Bank of North Macedonia, where for ten months served as an acting Chief Operating Officer (COO).