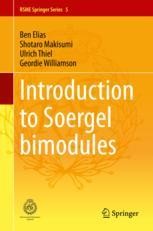 This book provides a comprehensive introduction to Soergel bimodules. First introduced by Wolfgang Soergel in the early 1990s, they have since become a powerful tool in geometric representation theory. On the one hand, these bimodules are fairly elementary objects and explicit calculations are possible. On the other, they have deep connections to Lie theory and geometry. Taking these two aspects together, they offer a wonderful primer on geometric representation theory. In this book the reader is introduced to the theory through a series of lectures, which range from the basics, all the way to the latest frontiers of research.

This book serves both as an introduction and as a reference guide to the theory of Soergel bimodules. Thus it is intended for anyone who wants to learn about this exciting field, from graduate students to experienced researchers.

Ben Elias hails from sunny Massachusetts and is well known for his wit and ability to do diagrammatic calculations like no other. He’s also been known to solve a crossword at the same time as playing a Bach prelude. He is currently a professor at the University of Oregon.

Shotaro Makisumi (known to his friends as “Macky”) is originally from Ube, Japan. He studied at Stanford and is currently at Columbia. Despite his successes proving theorems, he is still best known for his extraordinary skills with the Rubik’s Cube.

Ulrich Thiel studied in Kaiserslautern, Germany, and after a brief voyage around the globe, recently returned there to take up a professorship. Let’s be honest: he’s the brains behind the operation.

Geordie Williamson grew up with the wombats and kangaroos in rural Australia. He completed his PhD under Soergel’s supervision, and after stints in Oxford and Bonn, returned to his furry friends in 2017.

All four authors delight in challenging each other to bouts of sumo, before retiring to a traditional meal of chanko nabe.