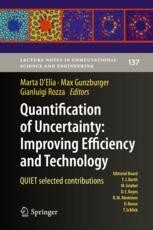 This book explores four guiding themes – reduced order modelling, high dimensional problems, efficient algorithms, and applications – by reviewing recent algorithmic and mathematical advances and the development of new research directions for uncertainty quantification in the context of partial differential equations with random inputs. Highlighting the most promising approaches for (near-) future improvements in the way uncertainty quantification problems in the partial differential equation setting are solved, and gathering contributions by leading international experts, the book’s content will impact the scientific, engineering, financial, economic, environmental, social, and commercial sectors.

Dr. Marta D'Elia is a staff member at Sandia National Laboratories. She graduated with honors in Mathematical Engineering at Politecnico di Milano, 2007, and she has a Phd in Applied Mathematics from Emory University, 2011. She was a postdoctoral fellow at Florida State University from 2012 to 2014. Her research deals with computational science and engineering, and it is mainly focused on modeling and simulation of nonlocal problems. She authored more than 30 research papers, she is the principal investigator of a Laboratory Directed R&D grant, associate editor of the SIAM Journal on Scientific Computing and organizer of several international conferences.

Gianluigi Rozza is a Professor of Numerical Analysis and Scientific Computing at SISSA, the International School for Advanced Studies, in Trieste, Italy, where he is a lecturer and coordinator of the SISSA doctoral program in Mathematical Analysis, Modelling and Applications, and director delegate for innovation, valorisation of research and technology transfer. His research chiefly focuses on developing reduced order methods. The author of more than 120 scientific publications, Principal Investigator of the European Research Council AROMA-CFD project. Winner of the 2004 Bill Morton CFD Prize (Oxford University); ECCOMAS Phd Award 2006; Springer CSE prize in 2009; and ECCOMAS Jacques Louis Lions Award in 2014.