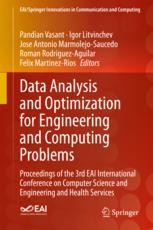 Data Analysis and Optimization for Engineering and Computing Problems

This book presents the proceedings of The EAI International Conference on Computer Science: Applications in Engineering and Health Services (COMPSE 2019). The conference highlighted the latest research innovations and applications of algorithms designed for optimization applications within the fields of Science, Computer Science, Engineering, Information Technology, Management, Finance and Economics and Health Systems. Focusing on a variety of methods and systems as well as practical examples, this conference is a significant resource for post graduate-level students, decision makers, and researchers in both public and private sectors who are seeking research-based methods for modelling uncertain and unpredictable real-world problems.

Igor Litvinchev Professor Igor Litvinchev received his M.Sc. degree in Applied Mathematics from Moscow Institute of Physics and Technology (Fizteh), Russia; Ph.D. in Systems Theory and Operations Research and Dr.Sci. (Habilitation) in Systems Modeling and Optimization from Computing Center, Russian Academy of Sciences, Moscow. He has held long term visiting positions at universities in Brazil, Mexico, and Norway, as well as positions at various universities and research centers in Russia. He is currently a Head of Department at Computing Center Russian Academy of Sciences and Professor at Nuevo Leon State University, Mexico. He is an author of 4 books and numerous research papers focused on large-scale systems modeling, optimization, and control. His research was supported by more than 30 grants from NATO Scientific Affairs Division and European Community; ISF (USA) and RFBR (Russia); CNPq and FAPESP (Brasil); BRFBR (Belarus); CONACYT, PROMEP and PAICYT (Mexico). Professor Litvinchev is a member of Russian Academy of Natural Sciences and Mexican Academy of Sciences. JOSE A. MARMOLEJO SAUCEDO is a Professor at Panamerican University, Mexico. His research is on operations research, largescale optimization techniques, computational techniques and analytical methods for planning, operations, and control of electric energy and logistic systems. He is particularly interested in topics related to artificial intelligence, digital twins, the Internet of things and Industry 4.0. He received his Doctorate in Operations Research (Hons) at National Autonomous University of Mexico. At present, He has the second highest country-wide distinction granted by the Mexican National System of Research Scientists for scientific merit (SNI Fellow, Level 2). He is a member of the Network for Decision Support and Intelligent Optimization of Complex and Large Scale Systems and Mexican Society for Operations Research. He has coauthored research articles in science citation index journals, conference proceedings, presentations, books, and book chapters. ROMAN RODRIGUEZ-AGUILAR is a professor in the School of Economic and Business Sciences of the “Universidad Panamericana” in Mexico. His research is on large-scale mathematical optimization, evolutionary computation, statistical modeling, mathematical finance, competition and market regulation. He received his Ph.D. at School of Economics at National Polytechnic Institute, Mexico. He also has a master's degree in Engineering from the School of Engineering at the National University of Mexico (UNAM), a master's degree in Administration and Public Policy in the School of Government and Public Policy at Monterrey Institute of Technology and Higher Education, and a postgraduate in applied statistics at the Research Institute in Applied Mathematics and Systems of the UNAM and his degree in Economics at the UNAM. Prior to joining to Panamericana University, he has worked as a specialist in economics, statistics, simulation, finance and optimization, occupying different management positions in various public entities such as the Ministry of Energy, Ministry of Finance, and Ministry of Health. He has coauthored research articles in science citation index journals, conference proceedings, presentations and book chapters. He is a member of the National System of Researchers Level II of CONACYT Felix Martinez-Rios received his B.Sc. degree in Physics from the Universidad de la Habana, Cuba, in 1985, and the M.Sc. and Ph.D. degrees in Computer Science from the Tecnologico de Monterrey, Mexico City, Mexico, in 2005 and 2009, respectively. From July 1985 to July 1987 he joined the Telecommunications Research Laboratory in Havana as a researcher, Cuba. In July of 1987, he began as a professor at the Higher Pedagogical Institute in Havana, Cuba until 1994. In 1997, he joined the Engineering School of Universidad Panamericana at Mexico City, as a full-time professor. From 1998 to 2009, he heads the Computer Science Engineering Program. From July 2009 to 2016 he was a Dean of Engineering School. He teaches undergraduate and postgraduate subjects such as artificial intelligence, mobile robotics, scientific computing, theory of compilers and object oriented programming. He is the faculty advisor for the aerodesign international competition organized by the Society of Automotive Engineers, USA. His current research interests include artificial intelligence, optimization algorithms, data science, mobile robotics and the internet of things. He is a member of the Steering Committee of the international conference on computer science and computational intelligence and General Chair of the international conference on computer science and engineering and health services.
Show all