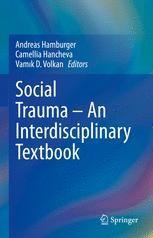 This book explores the intersection of clinical and social aspects of traumatic experiences in postdictatorial and post-war societies, forced migration, and other circumstances of collective violence. Contributors outline conceptual approaches, treatment methods, and research strategies for understanding social traumatizations in a wider conceptual frame that includes both clinical psychology and psychiatry. Accrued from a seven year interdisciplinary and international dialogue, the book presents multiple scholarly and practical views from clinical psychology and psychiatry to social and cultural theory, developmental psychology, memory studies, law, research methodology, ethics, and education.

Among the topics discussed:

Social Trauma: An International Textbook fills a critical gap between clinical and social theories of trauma, offering a basis for university teaching as well as an overview for all who are involved in the modern issues of victims of social violence. It will be a useful reference for students, teachers, and researchers in psychology, medicine, education, and political science, as well as for therapists and mental health practitioners dealing with survivors of collective violence, persecution, torture and forced migration.

Andreas Hamburger, psychoanalyst (DPG) and psychologist. After teaching for a decade as an assistant professor at Munich University, he became a senior lecturer of psychoanalytic Psychology at Kassel University 2007-2009 and was called as a full professor of clinical psychology to the International Psychoanalytic University, Berlin in 2009. He was a research fellow at the Sigmund Freud Institute, Frankfurt since 2005, member of the Yale Videotestimony Study 2007-2018, founder and speaker of the DAAD research networks Trauma, Trust and Memory / Migration – Trauma in Transition / Social Trauma in Changing Societies since 2012. He was chair of the policy makers conference “Dreams to Nightmares - Welcoming Culture, Xenophobia and Social Trauma Along the Balkan Route” in Berlin, December 2018.

Camellia Hancheva, PhD is an Associate Professor at the Department of General, Experimental, Developmental and Health Psychology, Faculty of Philosophy, Sofia University, Bulgaria. Her main research interests are in the field of relational psychoanalysis and application of psychoanalytic methodology for understanding micro processes of human development within the attachment dyads and macro processes of group and social interactions. She is trained as a systemic family therapist and has a clinical experience with terminally ill patients and their families and people with traumatic losses. As a part of TTM, MTT and STiCS research networks, Camellia Hancheva is a node leader for Bulgaria and coordinator of Social Trauma Course for seven universities on the Balkans and Germany. The ongoing social and academic mission of her work is in exploration the impact of social trauma in the post-war and post totalitarian societies and enhancement of reflexivity, mentalization and empathy on individual and social level.

Vamık D. Volkan is an emeritus professor of psychiatry (University of Virginia), a training and supervising  analyst (Washington Psychoanalytic Institute), a senior Erik Erikson scholar (Austen Riggs Center, Stockbridge, MA), and a former president of the International Dialogue Initiative, the International Society of Political Psychology, the Virginia Psychoanalytic Society, and the American College of Psychoanalysts. He is a leading expert on large group conflict and “enemy” dialogue, and has published over fifty books, many of them translated in more than six languages on clinical and political psychoanalysis.