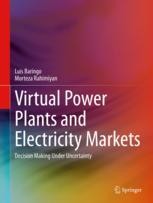 The book is written in a tutorial style and modular format, and includes many illustrative examples to facilitate comprehension. It is intended for a diverse audience including advanced undergraduate and graduate students in the fields of electric energy systems, operations research, and economics. Practitioners in the energy sector will also benefit from the concepts and techniques presented in this book. In particular, this book:

postdoctoral researcher at the Power Systems Laboratory, ETH Zurich, Switzerland. He has

published over 20 papers in SCI journals and is the author of two textbooks published by Springer.

He is an IEEE Senior Member.

Iran, received the B.Sc. degree from the Isfahan University of Technology, Isfahan, Iran, in

he was a visiting researcher at the Universidad de Castilla-La Mancha, Ciudad Real, Spain. He

has published more than 15 papers in SCI journals. He is an IEEE Member.